The Power of Honesty.

In a forest in the Himalayas the Bodhisattva was born as a baby quail. Together with his many brothers and sisters, he lived in a nest built with great care by his parents on a branch in the midst of a dense thicket. Being only a few days old, his wings had not yet developed and the limbs of his tiny body were barely discernable. 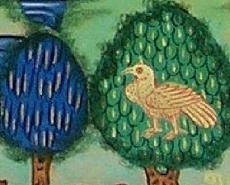 Yet even as a simple baby bird, the Bodhisattva had not lost his awareness of right and wrong. Unlike his brothers and sisters, he refused to feed on any of the living creatures brought by the mother and father birds. He would only eat from the small amounts of vegetable food they would supply him with, which was nothing more than grass seed and twigs. Insufficient and coarse, such poor nourishment did not help his wings develop or his body to grow, so he remained weak and small as the other birds grew strong. Such is the way of the world for many, for many who practice righteousness are often only rewarded with hardship while those who choose to overlook right action often thrive. As the Enlightened Ones have said: the shameless lead happy lives.

One day an enormous fire erupted in the forest not far from the quails nest. The fire rapidly spread throughout the dry thicket and all the forest animals fled in fear. Instantly, the family of quail took off in flight, each fending for themselves, except for the Bodhisattva who did not have the strength to leave the nest. The Bodhisattva quail remained calm and undisturbed. 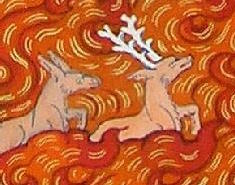 As the fire quickly approached and was about to engulf the nest, the Bodhisattva, as a quail, calmly spoke to the fire with the words, "my feet are not strong enough to deserve their name, my wings are unable to fly. My parents you have put to flight, I have nothing worth offering a guest such as you. Therefore, fire, turn back!"

Because these words were true and honest, as soon as the bodhisattva uttered them, the fire subsided. Even though it was fanned by fierce winds and raging in the underbrush below, the fire stopped, as if charmed by a spell.

To this day in the Himalayas, it is believed that any forest fire that reaches that famous spot in the mountain forest, however high its flames and however strong the wind, will lose its force. It is said that the sea can no more transgress its boundaries, or the virtuous ignore what is right, than can fire defy the truth. Because of this, it is taught that the wise should never abandon their devotion to true speech.

1. A quail lives in the forest.

2. The weak quail turns back a fire.

3. The power of honest words.