A Tale of Leadership and Self Sacrifice.

Deep in a beautiful and blessed region of the Himalayas, the Bodhisattva lived as the king of the Monkeys. The whole Monkey kingdom inhabited a large banyan tree that was so tall it was believed to be the Lord of the Forest. Its large branches swelled with beautiful and fragrant fruit that sustained the entire kingdom.

One branch of the tree hung over a river. The Bodhisattva, in his wisdom, told his troop that they must always keep that branch from bearing fruit, for if it did, they would never taste the splendor of its growth again. They indeed took great care that this should not happen, yet one day a small fruit far out on the branch that was curled up in a leaf fell into the river. It traveled downstream to where a king was bathing with his harem. Never having smelled such a fragrance, or seen such a food, the king tasted it and was amazed by its wonderful flavor. He proclaimed that such a marvelous fruit was fit only for royalty and decided to find the source.

The king then set off upstream with a large body of armed men. He knew it could not be far because the fruit was still fresh when it reached him, and before long the tree was in sight. An intoxicating aroma more fragrant than ripe mangoes wafted through the ranks of men, but when the king saw monkeys running among the tree's boughs and branches, he became enraged. He saw them devouring the fruit and felt that they were robbing him of what he craved. He ordered his men to attack. 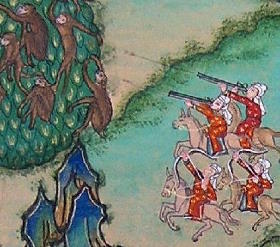 The warriors strung their bows with arrows and began to shoot, all the while yelling war cries to frighten away the monkeys. The noise was tremendous and the monkeys were frightened, looking to their king for guidance. Some of the men picked up stones, sticks, and spears and rushed the tree as if attacking a hostile fortress. The Bodhisattva however, seeing that his frightened subjects were depending on him, reassured the group. Quickly climbing to the top of the tree, and in one giant leap, he flew to a nearby hilltop where he found a bamboo cane that was tall, strong, and deeply rooted. Fastening the top of the cane to his feet, and leaving it rooted in the earth, he jumped back to his tree home. Holding a branch of the tree taught, he ordered all the monkeys to evacuate across his body and down the cane to safety. Desperate and bewildered by fear, the monkeys wildly scrambled across the body of the king and down the cane. Although his body grew weak and numb, his mind remained firm, for the survival of his subjects was his only concern. 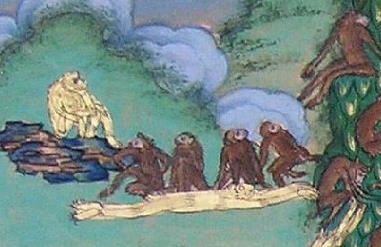 Witnessing this, the human king and his men became overcome with astonishment. They had never seen such strength and wisdom combined with such great self denial and kindness for others. The human king ordered his men to stop attacking. Seeing that the great monkey would not be able to hold his position much longer, as the hordes of frightened monkeys had bruised and torn their leaders limbs, the king ordered a canopy be held up to catch the monkey when he fell. After the monkey landed in the canopy, the king had him carefully lifted onto a soft couch. As he lay there unconscious from pain and exhaustion, the human king had the monkey's wounds salved and washed with butter and medicinal ointments and before long he recovered his senses. 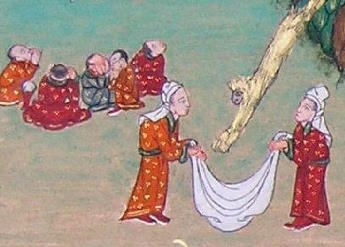 The human king approached, full of curiosity, admiration, and respect, and asked the great monkey who he was in relation to all the monkeys he had saved. To his great surprise, the monkey replied that he was their king. He explained that as their ruler, he was bound to them with the same affection that parents have for their children. The shocked king retorted that subjects are meant to serve their king and not the other way around, and then inquired why he would dare sacrifice himself for mere servants. The monkey stated that he was unable to overlook suffering in strangers, much less kin, and especially not in those who are intent on looking to him as their leader. He explained to the man that although his body was broken, his mind is totally sound, and that he would happily and patiently wait through the pain of his injuries because the discomfort was nothing in comparison to the joy of saving his subjects. He then asked the human king to look at all that has come from his physical sacrifice, he had now achieved satisfaction, serenity, fame, and even the admiration and honor of a king of men! He continued to explain to the human king that a ruler who does not know kindness will never know such virtues and will in fact, obtain their opposite.

The Monkey Kings last words to the human king was that he must always protect his kingdom with spiritual truth, and to view all subjects, from officials to peasants, humans to animals, as if they were his own children. The great Monkey King then peacefully passed away and ascended into the heavenly realms.

1. A wise Monkey King in a fruit tree.

3. A lesson in kindness and leadership.