A Tale of Self Sacrifice.

At one time, the Bodhisattva took birth as a large Elephant. He lived in a forest far from civilization. The forest contained a lake that was both deep and wide and the entire wilderness was surrounded on all sides by an expansive desert. This beautiful oasis was well suited for the elephant as well as other smaller creatures. Delicious fruit grew on the trees, young shrubs carpeted the earth, and the whole area was bordered with high mountains. The Elephant lived alone as an ascetic and sustained his large body only on leaves and lotus roots, dedicating his time to contemplation on the virtues of contentment and tranquility.

One day while wandering along the forests edge, the Bodhisattva Elephant heard the cries of humans coming from the desert. Their cries began to get louder; surely they were approaching the oasis.

Urged by compassion, he ran towards them swiftly and when they came into sight he saw that it was a large group of men, women, and children, all nearly dead from starvation and thirst. Noticing that they were fearful of him, he called out in a human voice and stated that they need not be frightened. Upon hearing such peaceful and comforting words the people regained their composure and humbly greeted him. 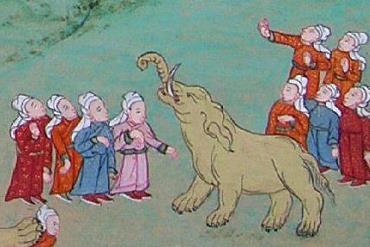 The elders explained that they had been banished by an angry king and that many of them had already died in the desert. The kind Elephant realized that all the fruit in the forest would not be enough to feed them for even a day. He resolved that he must offer his own flesh as food and his organs and intestines as bags to carry water on their journey. He then instructed the people on how to find the great lake and said that just beyond it they would find the corpse of an elephant that had fallen from a mountaintop, not telling them that it would be his own corpse. As the group set out towards the water, he quickly, by another route, started to ascend the mountain. Upon reaching the top he then, feeling great joy and oblivious of the impending painful death below, hurled himself over the edge of the precipice. The impact sounded like an earthquake throughout the entire forest.

Meanwhile, the group of exiles had reached the lake and refreshed themselves with the cool water. Following the Bodhisattva's directions, they discovered the body of an elephant not far away. At first, they were surprised that the corpse so closely resembled the kind Elephant they had just met. Before long, a clever one in the group determined that it was in fact the same Elephant. Awestruck by the incredibly generous and selfless act of the great beast, they burst into tears of gratitude. 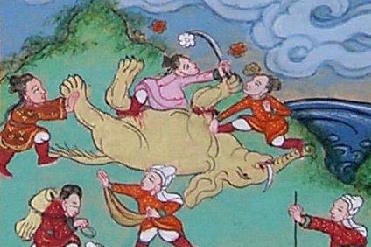 Some in the group thought that they should not eat such a great Bodhisattva, stating that such a magnificent and compassionate being deserves nothing less than a proper cremation ceremony. Once again, the clever one explained that the true way to honor the elephant would be to eat his flesh as the Elephant had intended. The people ate until they were full, made bags to hold water, and crossed the rest of the desert without trouble.

1. An elephant lives in a remote oasis.

2. A group of starving humans arrives.

3. The elephant sacrifices his body for the humans.