A Tale of Patience

Despite countless lifetimes of selfless and virtuous action, perhaps due to the ripening of karma from ancient and forgotten misdeeds, the bodhisattva was once born in a low state as a large buffalo. Yet even in this brute animal state where ignorance prevails, he treated all who he encountered with compassion.

With a grim appearance and always caked with mud, the buffalo was quite intimidating. One malicious Monkey however, aware of the buffalo's natural goodness, was not afraid and liked nothing more than to tease him. The monkey knew that the Buffalo would be forgiving and not take action against him. The Monkey would climb on the Buffalo and swing from his horns, stand at his feet and keep him from grazing when hungry, and would even poke the buffalo's ears with a sharp stuck. The monkey would mount the Buffalo's back and ride him, holding a stick in his hand like the Lord of Death. It is said that the wicked consistently walk the path opposed to discipline, while the good-hearted, due to their practice of virtue, patiently aim to benefit even the wicked. 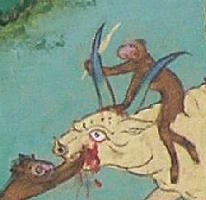 One day a yaksha spirit saw the monkey riding that buffalo and was scandalized by the indignities being heaped upon the great being. He wanted to know why the buffalo would not defend himself from such torture. The yaksha appeared in the path of the two and told the Buffalo that he would easily be able to kill the monkey if he chose to and asked him why he had not done so already. Did he not know his own strength? Was he the monkey's slave? Did the monkey win him in a game of chance? Was he for some reason afraid of the monkey? Was he not aware the monkey was wicked? The Buffalo replied that none of these were the case, and the fact that the monkey was devious, unstable, and powerless was actually the reason he put up with him. He wanted to help the monkey.

The Buffalo stated that it is easy to be patient with those who are more powerful but that when enduring injuries from the powerless, it is an opportunity to show real patience and virtue, however uncomfortable it may be. This satisfied the Yaksha who then threw the monkey from the buffalo's back, taught the buffalo a protective charm and vanished.

1. Buffalo is harrassed by a monkey.

2. Yaksha spirit asks buffalo why he does not defend himself.

3. Buffalo says he has patience for the monkey.