Drenpa Namkha is believed to have lived during the time of Trisong Detsen. It is said that he converted to Buddhism under pressure from the changing times and the persecution of Bon by the new Buddhist order sweeping over the Tibetan regions. Drenpa Namkha had two wives and two sons. The first son was named Yungdrung Donsal and the second Pema Tongdrol. The first having attained through austerities and meditation the gift of long life was also known as Tsewang Rigdzin. His younger brother was gifted with magical powers and was also known as Padmasambhava.

Drenpa Namkha is often identified by the banner (parasol) attribute upraised in the hand. The deity Sangpo Bumtri also typically holds the banner attribute in the right hand, sometimes in the left. However, Sangpo Bumtri is always depicted seated on, or above, a bird throne. Drenpa Namkha is typically depicted seated on a lion supported throne, not a 'kyung' or peacock throne. 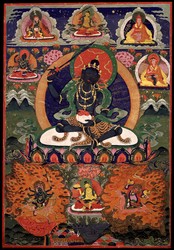 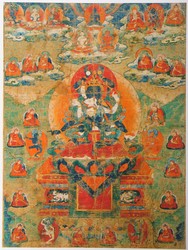 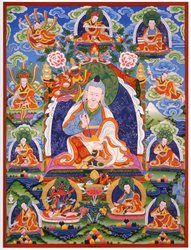 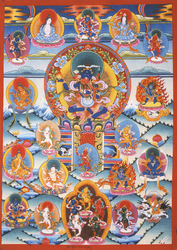 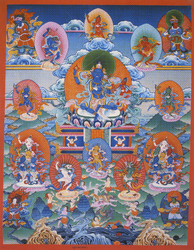 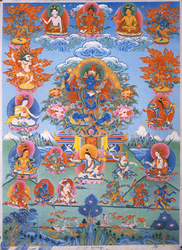