Amulet Box (Tibetan: ga'u): portable shrines generally made from metal in a repousse style of construction. The purpose and function of an amulet box is for general protection and protection when traveling. Amulet boxes are also commonly used to store all manner of sacred materials such as small texts, blessing cords, consecrated medicine, relics, and the like.

The amulet can generally be found in three sizes. The smallest is usually worn around the neck containing precious and blessed objects. These amulets are often in miscellaneous shapes, round or oblong.

A medium sized amulet box generally has three parts: (1) the metal container of whatever shape, (2) a cloth outer covering with a buttoned fold for opening, and finally (3) the contents of the amulet box which can be an image made of metal, tsa-tsa, cloth, string, medicine, or anything that is deemed special or blessed. They often, but not always, have a small window on the front with a religious image inside. Typically the front is very ornate and decorated with the Eight Auspicious Symbols and other motifs. Objects such as this were generally carried when traveling some distance away from home, such as on pilgrimage, or for extended business trips.

The largest of amulet boxes is typically in the shrine shape and follows the basic design of the medium sized box. They are normally too large to carry and remain on a shrine in a home or temple. 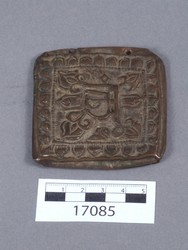 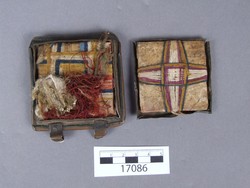 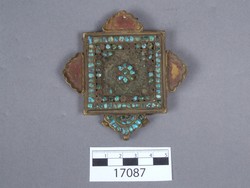 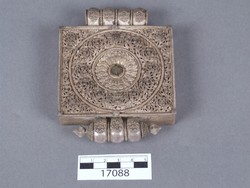 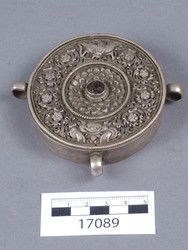 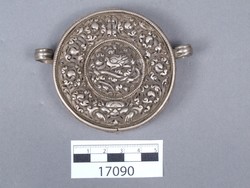 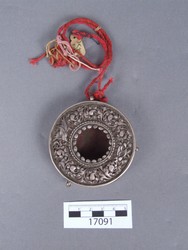 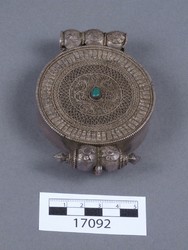 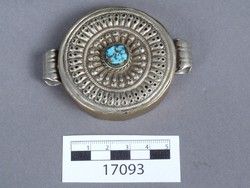 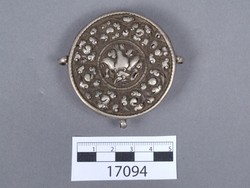 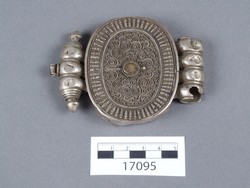 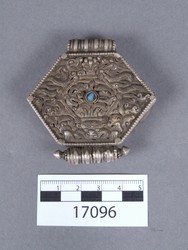