Shingkyong as a Central Figure:
Shingkyong Wangpo (Yab) is a male protector deity, wrathful in appearance, blue in colour, with a lion face. He wears a heavy black cloak and rides a black horse; often depicted with his consort companion Sengdongma in the same general appearance. Originating in the Nyingma tradition, Shingkyong can also be found in the iconography and art of the Karma Kagyu school. The Raudrantika class of Mahakala and the majority of figures described in that class are very similar in appearance to Shingkyong and therefore it is possible that he belongs to this classification.

Shingkyong as an Attendant Retinue Figure:
Shingkyong Yab-yum can appear as central figures in their own composition. They are commonly found as retinue figures in the entourage of Bernagchen Mahakala and sometimes depicted with Shri Devi Rangjung Gyalmo and consort Bernagchen, and with Chaturbhuja Mahakala. They are often accompanied by their Shingkyong retinue.

Bamro Yab-Yum:
The Bamro Yab-Yum appear as two tall, thin, monkeys standing or walking on their hands and both holding upraised with their feet wrathful red triangular food offerings (torma). The Bamro are attendant deities to Shingkyong and generally appear in the same compositions and also can appear in paintings where Shingkyong is included as an attendant figure to Bernagchen Mahakala, Chaturbhuja Mahakala or Shri Devi. (The Bamro do not appear in all compositions of Shingkyong but it is understood that they belong to the entourage of retinue figures). 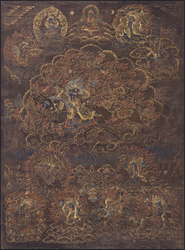 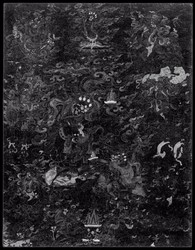 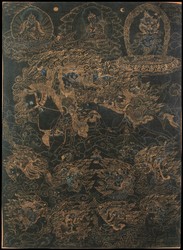 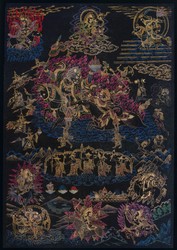 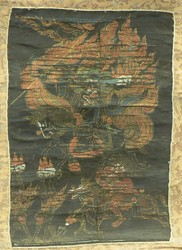 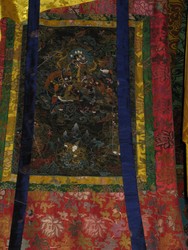 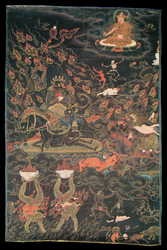 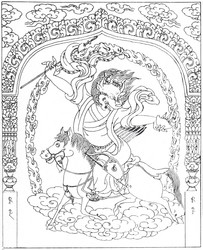 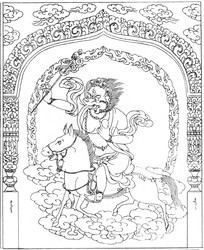 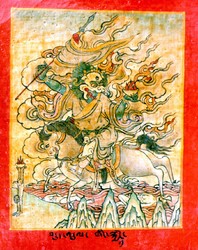 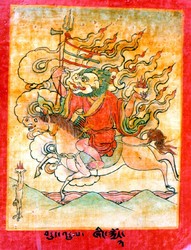 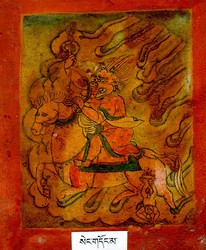