- Video: A Question on Torpar

Torma Molds (torpar) are carved wooden lengths of wood with images of the different sets of offerings used to create 'tsampa' barley dough replicas, or substitutions, of real figures and objects, for use in Buddhist and Bon rituals in the Himalayan and Tibetan regions.

An alternative to using prepared dough figures pressed from a deeply carved wooden mold are painted slivers of thin wood that depict the same figures, animals and objects. Another method to rapidly reproduce the figures is to create the prints on paper from shallow carved wood blocks (see examples).

Typically the figures include a man and a woman, often with the hands placed at the waist in a passive gesture. Other groups of figures include the Nine Animals that Fly in the Sky, Nine Animals that Walk on Land, and the Nine Animals that Live in Water (see an example) along with many other objects including the Eight Auspicious Symbols (see an example). There are naga creatures and strange hybrid animals all of which appear to be unique to Tibetan culture and possibly a borrowing from the early Bon ritual practices. These strange creatures so far are unknown in Indian Buddhist literature.

The dough molds can be single lengths of wood with two or more sides, with the important figures carved in groups, or they can be sets of lengths, fastened together with string or leather cord. A single side or both sides can be carved with figures and symbols. Some examples are also stained with colour as the dough can be pre-coloured prior to pressing, or coloured after pressed and readied for use (see an example). 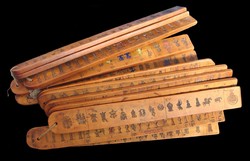 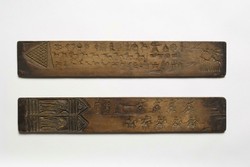 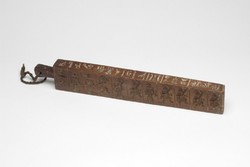