Kshitigarbha, Bodhisattva (Tibetan: 'phags pa sa'i snying po. English: the Essence of the Earth): one of the eight principal Mahayana students, or 'heart sons,' of the Buddha Shakyamuni.

The 'Eight Heart Sons,' including such notables as Manjushri and Avalokiteshvara, figure prominently in the various Mahayana Sutras of Northern Buddhism. Kshitigarbha is particularly associated with bringing help and comfort to those in the underworld realm of hell beings.

Originating with the Kshitigarbha Bodhisattva Purvapravidhana Sutra, Kshitigarbha has remained primarily a character of the Mahayana Sutras. There are very few Tantric texts and rituals that include him and because of that he does not have a fixed and readily identifiable iconographic appearance like Lokeshvara or Manjushri.

Kshitigarbha is rarely if ever depicted alone in painting or created as a single sculpture. He is almost always included as one of the Eight Great Bodhisattvas typically appearing with the others seated below Amitabha Buddha in the Sukhavati Heaven or with Shakyamuni Buddha.

"...Kshitigarbha is yellow with a yellow upper garment, peaceful eyes, red at the sides, [and] a headdress garland of blue flowers. The right hand holds a fruit and the left a jewel above a lotus [flower]." (Jonang Taranata, yi dam rgya mtsho'i sgrub thabs rin chen 'byung gnas, folio 506-507).

"...Arya Kshitigarbha, white in colour, with one face, peaceful in appearance. With two hands the right holds to the heart a precious seed. The left [hand holds] a bell turned up [at the waist], resplendent and seated in a relaxed posture." (Loter Wangpo, sgrub thabs kun tus, volume 11, folio 71).

In the Akshobhyavajra Guhyasamaja mandala there are eight bodhisattvas in the outer square - two in each direction. In the East are Maitreya and Kshitigarbha. They are both white in colour, peaceful, and have three faces and six hands, seated in vajra posture.

In the Kalachakra mandala of 634 Deities, in the third level of deities between the four gates are six bodhisattvas, each with a consort. Kshitigarbha is represented with three faces, red in colour, having six arms and embracing the consort Rodorjema.

In the Vajradhatu mandala of 37 deities according to the Samputa Tantra the eight bodhisattvas are represented in the second square of the palace. In the eastern direction are Maitreya and Kshitigarbha, both with one face and two hands.

In the Vajrasattva mandala of 37 deities according to the Samputa Tantra the eight bodhisattvas are represented similar to the previous Vajradhatu mandala. 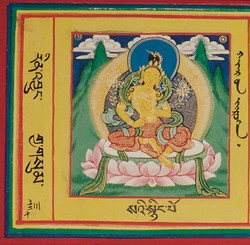 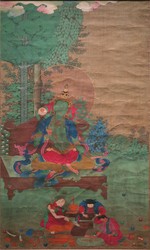 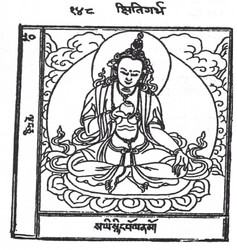