Samantabhadra is a bodhisattva known from Mahayana literature in such renowned works as the Saddharma Pundarika (Lotus of the Good Law) and Avatamsaka (Flower Garland) Sutras. He is most often depicted in art as a member of the group known as the Eight Great Bodhisattvas which include the famous Manjushri, Avalokiteshvara and Vajrapani. Unlike those figures Samantabhadra never gained the popularity and was not elevated in the Tantric literature to the level of a meditational deity (ishtadevata). Samantabhadra the bodhisattva is unrelated to Samantabhadra the primordial Buddha of the Nyingma Tradition of Tibetan Buddhism.

Samantabhadra is rarely if ever depicted alone and his iconographic characteristics are not fixed and often difficult to identify. In some descriptive ritual praises (stotra) Samantabhadra is described as red in colour. He holds a vase in the right hand and the symbol of the sun atop a flower blossom held in the left hand. In the Chinese artistic tradition Samantabhadra is commonly depicted seated atop an elephant. He can hold a variety of different attributes such as a vajra scepter, book, parasol, vase, jewels and others. There is also a mountain sacred to Samantabhadra call Omei Shan in Sichuan Province.

In the Shakyashri Rakshita tradition of Samantabhadra he is red in colour with two hands holding a vase and a flower. In the artistic tradition of Konchog Pende of E (circa 16th century) Samantabhadra is blue in colour and holds a book with both hands. This blue form of the figure is followed by the artists of Palpung Monastery.

Samantabhadra as a stand alone deity such as Lokeshvara and Manjushri is not very popular. He is principally found as part of the Eight Great Bodhisattvas who commonly populate the foreground of Amitabha Buddha in Sukhavati paintings. 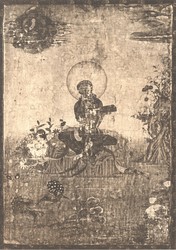 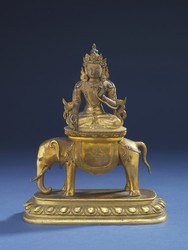 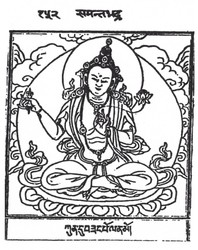 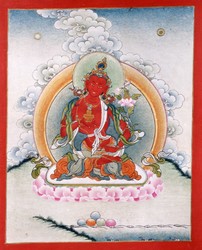 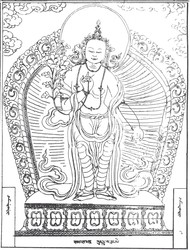 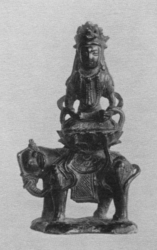