The iconographic program of the Nyag Lhakang karpo is that of the Dharmadhatu Vagishvara a mandala originating from the Buddhist Namasangiti Tantra [TBRC W22003]. There are seven main mandalas contained in the Namasangiti Tantra.

The Manjushri Namasangiti Tantra was first translated into Tibetan in the 8th century and re-translated during the Sarma period in the 11th century. Monks and lamas from all Buddhist traditions memorize the Tantra in early childhood. From the standard four classifications of Tantra the Namasangiti is found in both the Yoga and Anuttarayoga Tantra sets. This Tantra introduces seven principal mandalas depicting numerous forms of Manjushri both peaceful and wrathful. The mandala of Dharmadhatu Vagishvara is the seventh from the group of seven.

Only three of the original four walls remain, the two side walls and the inside entrance wall divided into two by the door. The far wall opposite the entrance is completely gone with no remnants of the original mural at all. The right hand side, viewed from the entrance, has two different subjects. The mural closest to the door depicts a buddha figure surrounded by scores of worshiping acolytes taking up half of the wall. The second topic is a set of five buddha-like figures , with peaceful deity crowns and ornaments, accompanied by attendant figures above and below.

The topic of the left wall, viewed from the door, are the principal deities of the Dharmadhatu Vagishvara mandala arranged in horizontal registers. The depiction is NOT a mandala itself but rather the presentation of the deities without the mandala structure of center and circumference and the obligatory central palace.

The two partial wall on either side of the entrance door depict the worldly gods of India such as Ganesha, Garuda, and the Earth Goddess. 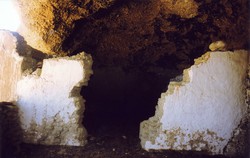 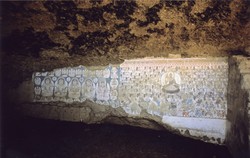 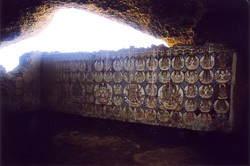 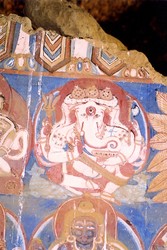 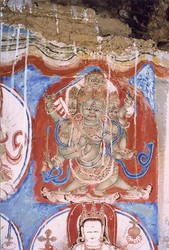 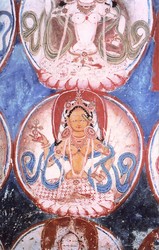 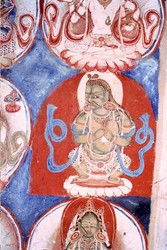 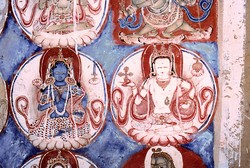 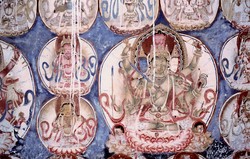 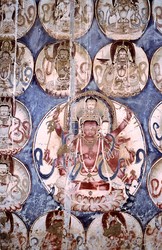 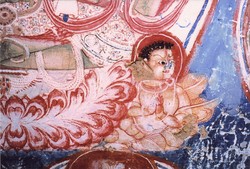 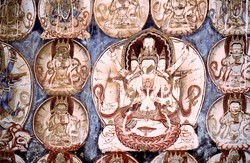