The Five Activity Protectors are emanations of Panjarnata Mahakala. They can typically appear as retinue figures in a painted composition or as sculpture. The five can also be found as a ritual practice independent of Panjarnata. The five are considered a family with the father and mother named Kala Rakshasa and the mother Kala Rakshasi. The three children, two boys and a girl are named Putra, Bhata (Bhatra) and Singmo (Rakshasi Ekajati).

[Activity Protectors] "... Kala Rakshasa with a body black in colour, one face, two hands, the right holds a curved knife, left a blood filled skullcup, wearing a ceremonial human skin and having gold earrings. ... Kala Rakshasi with one face and two hands, the right holds a gold razor, left a skullcup filled with brains and blood, wearing cloths of black silk, and having one braid."

"...the three Putras, brothers and sister. ... Putra, black, one face, two hands, the right holds a sword and the left a blood filled skullcup, adorned with silk trousers and clothes of black silk. ... Bhata, black, with a tiger skin fur coat, holding in the right a wooden stick and in the left a human heart. ... Rakshasi Ekajati (Singmo), holding in the right a gold razor and intestines in the left, blazing fire from the mouth. These five have bodies blue-black in colour, three very fierce eyes, adorned with garlands of bones and a necklace of fifty wet human heads, standing in a manner raging and trembling completely severing harmful ones."

[Four Leaders and Messengers] "Also to the right are others, one hundred led by a man adorned in a tiger garment. To the left, one hundred, led by a bhikshu with a large form, further followed by one hundred black mantradharins. In front, in empty spaces to the north are one hundred led by a black woman. Surrounded also by others, beyond thought, destroying oath-breakers, black dogs, black men, wolves, and the like." (Written by Ngorchen Konchog Lhundrub (1497-1557). Translated September 1995). 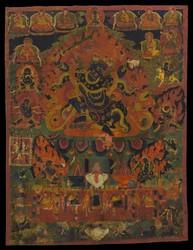 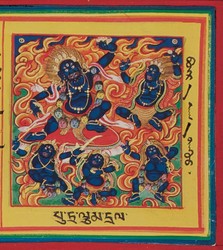 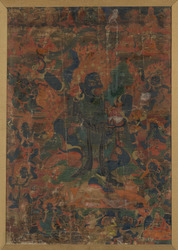 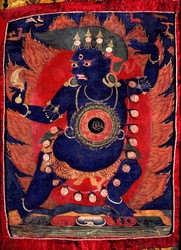 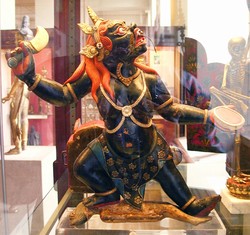 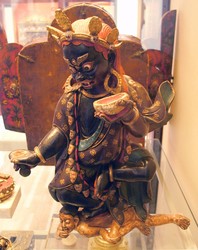 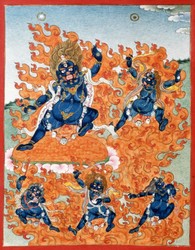 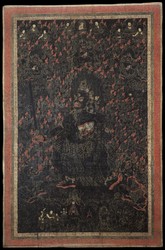 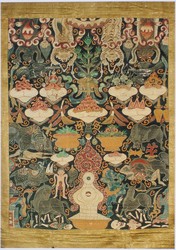 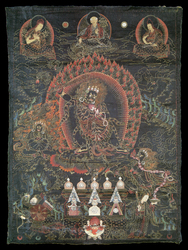 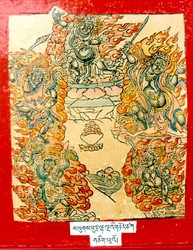