Dragpa Sengge (grags pa seng ge) is believed by followers of the Bon faith to be the daemon incarnation of the 10th Shamar Rinpoche, Chodrag Gyatso (1742–1792), subjugated by the abbot of Menri Monastery. Sherab Gong Gyal is named as the Menri abbot however his dates don't appear to line up chronologically as some texts state he was born in 1784. It is also curious that the subjugated spirit was given the name of the first Shamar Lama. Dragpa Sengge has a similar appearance to the Sakya tradition of Shugden Tanag. 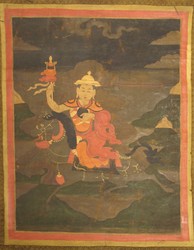 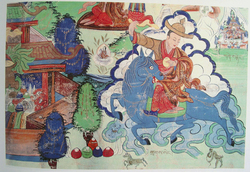