Nalendra Monastery was founded in 1435 by Rongton Sheja Kunrig (1367-1449) when he was in his sixties. Born in the Eastern area of Gyalmo Rong he became one of the 'Six Ornaments of Tibet.' He was regarded as an emanation of Maitreya based on prophecies and his actions. Yak Mipham Choje was his main teacher although he studied with many great Sakya teachers including Ngorchen Kunga Zangpo and had many famous students such as Gorampa Sonam Sengge and Shakya Chogden. Rongton is most famous for his commentaries on the 'Prajnaparamita' and the works of Dharmakirti and Maitreya. In all Rongton wrote 300 works from eulogies to commentaries on Tantras. Acknowledged as having reached the '6th bodhisattva ground' he could emanate, resurrect and fly in the sky. As a contemporary of Tsongkhapa, he was the first to oppose the Gelugpa teachings. His student Gorampa composed penetrating refutations of Tsongkhapa's interpretation of Madhyamaka. Rongton was also a great tantrika and in the 'Blue Annals' it says; "Outwardly he seems to have concentrated on the preaching of the Doctrine only. Inwardly he practiced yoga constantly, and was able to recognize the different shades of the panca-prana," (pp.1080-1082). Nalendra Monastery is located in the Phen-yul valley just North-east of Lhasa, the name being taken from the famous Nalanda Monastery of India. It housed approximately 700 resident monks and thousands of visiting monks studying at the various colleges. There were many branch monasteries in various parts of Tibet from Tsang to Amdo.

The Main monastery of the Tsar School of Sakya was Dar Drangmoche in Tsang Province. This was the seat and main residence of Tsarchen Losal Gyatso (1502-1555). 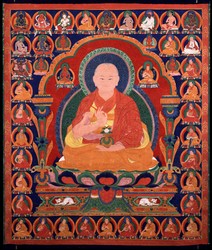