Mahottara (chem chog) is the principal heruka of the wrathful sambhogakaya deities of the Nyingma tradition. He is dark brown in appearance, wrathful, with three, nine or twenty-one faces. He has six, eighteen, or forty-two arms. He has two or eight legs standing atop the figure of Rudra. In art, both painting and sculpture, it is possible to find a simple one face and two armed form of Mahottara although this is rare. The three main forms of Mahottara are the three, nine and twenty-one faced deities.

There are several names, both Sanskrit and Tibetan, that are commonly used and often interchangeable which can lead to confusion in identification: Mahottara, Chemchog, Yangdag, Shri Heruka, Samputa, and possibly Buddha Heruka.

There are two different forms of the three faced Mahottara based on hand attributes. The first holds a vajra scepter in each of the three right hands. The three left hands each hold a skullcup. The second style is where the right hands hold a vajra, hand drum, and a katvanga staff. The three left hands hold a bell, lasso of intestines and skullcup. The colour of the consort can also vary. 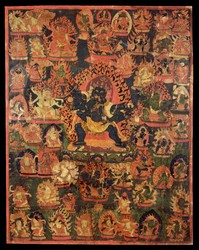 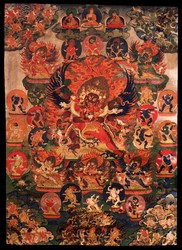 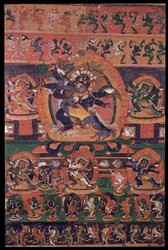 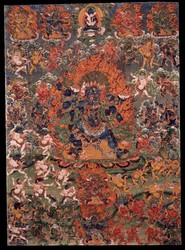 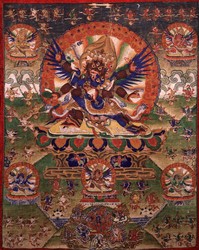 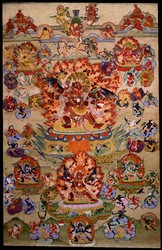 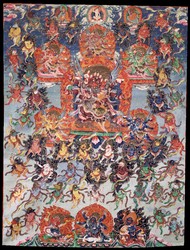 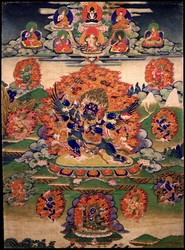 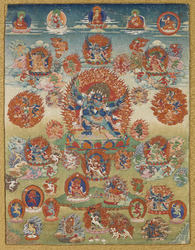 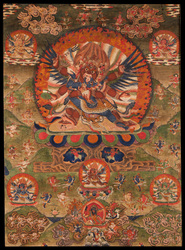 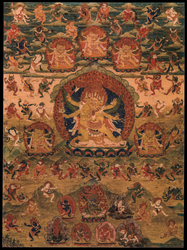