This form of Chaturmukha Mahakala, with minor differences in detail from the Sakya form, was created by Terdag Lingpa Gyurme Dorje at the request of five monks from the Lhukang Temple.

The two examples below are somewhat different in detail from each other although both of the iconographic forms follow the general description of Chaturmukha as written in the text of Terdag Lingpa. The coloured image is of a small mural from an equally small protector chapel in Mindrolling Monastery in Tibet.

The second image, in black and white, is a painting from Basel Switzerland. It does not depict the consort but does however have the retinue of four deities.

Description: "With four faces and four hands, having a terrifying form, the right face is white, left red, center dark blue, upper green. The two right hands hold a curved knife and sword. The two left [hold] a blood filled skullcup and a vajra tipped staff. The orange hair bristles upwards [and] at the right and left are fully spread vajra wings. Wearing charnel ground ornaments and the ten glorious adornments standing in an active posture while trampling on the heart of a demon. Embracing the father is the supreme secret mother Reti, light blue in colour, holding a katvanga and bag of disease [both] appearing in a vast blazing mass of terrifying fire.

In the East is a terrifying Naga demon, blue-black in colour, holding a snake lasso and a curved knife. The hair bristles upward and the lower body is a coiled snake. Wearing charnal ground ornaments; accompanied by a retinue of arrogant [ones].

In the south is Yamaraja, the principal 'Shinje', maroon in [colour, holding] a vajra tipped staff and drinking blood [from a skullcup], wearing charnal ground ornaments and riding a dark yellow buffalo, very frightful and surrounded by a retinue of arrogant [ones].

In the West is Rahula, maroon in colour, holding a water monster lasso and a blood filled skullcup, having 1000 eyes and riding a light red water monster, wearing charnal ground ornaments and accompanied by a retinue of arrogant [ones].

In the North is Rakshasa, purple, the right and left [holding] a sword and drinking from a blood [filled skullcup], having charnal ground ornaments, standing in a posture with the two legs apart. Performing actions, accompanied by a retinue of arrogant [ones]."

Differences Between the Sakya and Mindrolling Depictions:
1. Consort
2. Uppermost face is green
3. Wings on the back
4. Different retinue figures 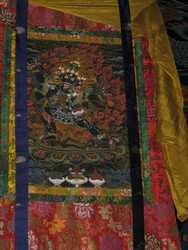 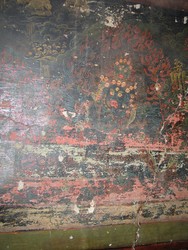 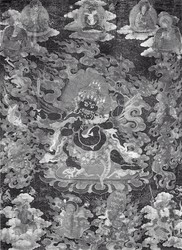