Based on the earlier Shakyashri Bhadra Tradition which describes various forms of the deity, the White Chakrasamvara tradition of Lama Umapa (14th century), a teacher of Tsongkapa, describes the figure as having a single face and two arms, embracing a red consort. Both are in a seated posture. The male figure holds two long-life vases in the right and left hands folded around the back of the consort. The consort holds two skullcups in the right and left hands. She is seated with her legs wrapped around the waist of Chakrasamvara.

"...Chakrasamvara, white like the reflection of the sun on a crystal mountain, stainless and radiant, one face, two hands, three eyes, hair in a topknot, adorned with beautiful ornaments, holding two long-life vases in the hands, embracing the consort, seated in vajra posture. In the lap is Vajrayogini, red in color, with one face, two hands and three eyes, seated, holding a skullcup filled with nectar in each hand, embracing the Lord around the neck, the two legs embracing the waist, beautifully dressed." (The description of White Chakrasamvara written by the 8th Tatsag is based on a sadhana written by the 5th Dalai Lama, Ngagwang Lobzang Gyatso, 1617-1682). 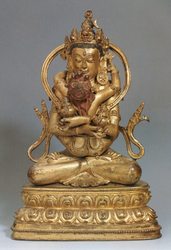 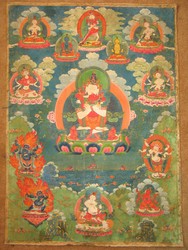 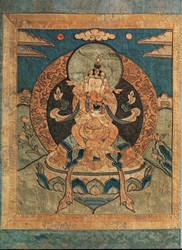 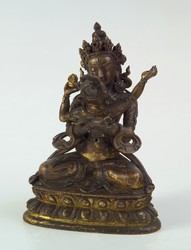 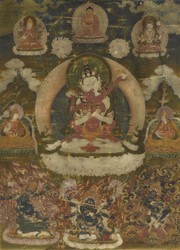 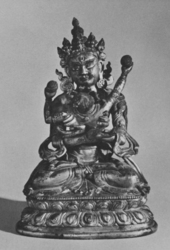 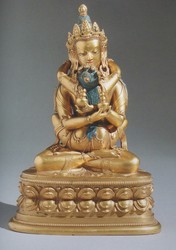 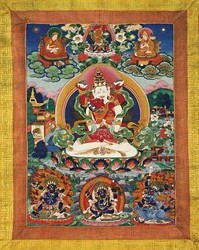 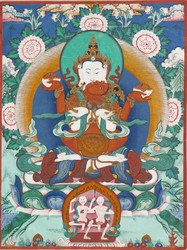