The Colour Presentation of the Four Faces of Chakrasamvara:

Chakrasamvara (Tibetan: khor lo dem chog. English: the Wheel of Bliss). The principal tantra of the Anuttarayoga Wisdom (mother) classification of the Vajrayana Buddhist Tradition. Chakrasamvara is one of the most popular deities in Tantric Buddhism in the Himalayan regions and Tibet after the 11th century. He can appear in several dozen different forms, from simple to complex and peaceful to wrathful, which makes it necessary to rely on the descriptive literature in the Sanskrit and Tibetan languages to identify him. Adding to the complexity, there are more than fifty different traditions/lineages of these forms in Tantric Buddhism. The different traditions found in the Tantric texts emphasize different types of meditation practice that are suited for specific types of emotional and psychological characteristics in the tantric practitioners who take on these intricate practices.

In the Tibetan Buddhist Tradition there are three traditions/lineages of Chakrasamvara that have become the most well known. There is both a principal form, or general appearance, for Chakrasamvara and many minor forms. What distinguishes the appearance of the various forms are the number of faces and arms, colours of the faces and body, with a consort or without. In Tibetan language these three are called the 'lu nag dril sum', meaning the 'Three [Chakrasamvara] of the Three [Indian Mahasiddhas] Luipa, Krishnacharin and Ghantapa.' In painting and art, it is these three forms of Chakrasamvara, associated with the three mahasiddhas, that are most often represented.

The four faces of the principal and most recognizable Chakrasamvara form are not always consistently the same colour or in the same order, such as with respect to what colours are on the right and left side of the central blue face. Yes, the principal form of Chakrasamvara is always blue in colour and the most central face is also blue. The inconsistencies are with the three remaing faces that are depicted to the right and lefts sides of the main face. Fortunately there are some general rules that are very helpful in identifying a particular form and tradition of Chakrasamvara.

For both painting and sculpture the Chakrasamvara of the Luipa Tradition is most commonly represented. There are three major indicators for a correct identification of a Luipa form. First, the faces are coloured, from left to right, yellow, blue, green and red. Secondly, the consort, Vajrayogini, red in colour with one face and two hands, is in a posture with both legs wrapped about the torso of Chakrasamvara. Thirdly, in many paintings the Luipa form will also be accompanied by sixty-two retinue mandala deities.

Depictions of the Krishnacharin Tradition of Chakrasamvara have the same general appearance as the Luipa form except for two key characteristics. Firstly, the colours of the four faces are white, blue, red and yellow. Secondly, the left leg of the consort, Vajrayogini, is outstretched and presses to the ground. The right leg is wrapped around the torso of Chakrasamvara. The Krishnacharin tradition also has sixty-two retinue deities in the mandala.

The majority of Chakrasamava depictions on the Himalayan Art Resources website follow the Luipa and Krishnacharin models. There are however a number of other paintings of Chakrasamvara in principal form where the colours follow a different scheme. 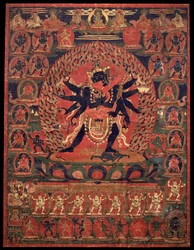 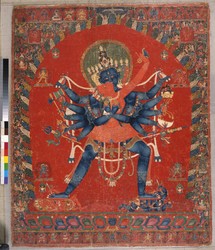 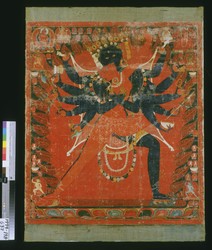