Pema Lingpa (1450-1521) was a Treasure Revealer of the Nyingma Tradition of Tibetan Buddhism. (See a short biography).

'The Very Condensed Essence' Avalokiteshvara has one face and two hands, red in colour, seated in vajrasana posture. In the right hand he holds to the heart a lotus garland (mala). The left hand is in the lap and holds a nectar vase with a lotus flower above. Seated in the lap is the consort, the great mother, Sangyema, red in colour and holding the same objects as Avalokiteshvara. In the literature describing in full the appearance and surroundings of Avalokiteshvara there are a number of other deities and figures. However, this was not the first occurrence of this particular 'treasure.' It was first discovered by Guru Chowang and then re-discovered by Pema Lingpa.

This form of Avalokiteshvara is commonly mistaken for the deity Amitayus Buddha. 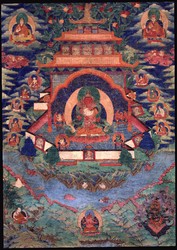 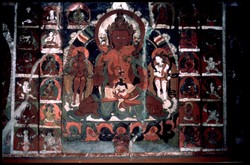