At a very young age Wensapa met his first teacher, Je Kyabchok Pelzang (rje skyabs mchog dpal bzang), the abbot of Wensa Monastery. He is said to have been an extraordinary student and practitioner even from youth, quickly surpassing the knowledge and understanding of all of his peers. As well, Wensapa is said to have had great, spontaneous, and natural faith for Tsongkhapa Lobzang Dragpa (tsong kha pa blo bzang grags pa, 1357-1419), and prayed to be able to embody the essence of his teachings. In pursuit of this goal, at the age of eleven, he took ordination as a novice monk at Chokhor Uding (chos 'khor dbus sdings) monastery. Dragpa Dondrub (grags pa don grub) of Lharitse (lha ri rtse) served as abbot and Tsultrim Rinchenpa (tshul khrims rin chen pa) was preceptor. He was given the name Lobzang Dondrub.

Soon after Lobzang Dondrub traveled to Drepung Monastery ('bras spungs) where he studied Lamrim (lam rim) and philosophical texts, and received instruction on the practices of highest yoga tantras with a number of lamas, particularly from Lharipa Drakpa Dondrub. When he was seventeen, ill with smallpox during an epidemic in Lhasa, he became the disciple of the siddha Chokyi Dorje (chos kyi rdo rje, b.c.1457), and from him received the detailed instructions on the oral tradition of Tsongkhapa, taking his place as a lineage holder of the Ganden Oral Tradition. Chokyi Dorje transmitted the oral tradition of Tsongkhapa's lineage of Ganden Mahamudra (dga' ldan phyag chen), which Tsongkhapa is said to have received from Mañjusri himself, together with the root text of the transmission, the Trulpai Legbam Chenmo (sprul pa'i glegs bam chen mo). From Chokyi Je Lodro Gyeltsen (chos kyi rje blo gros rgyal mtshan) he received the instructions, transmission, and permissions for the Nartang Gyatsa (snar thang brgya rtsa), the meditation instructions of Atisha, Guhyasamaja, among other tantric teachings.

Chokyi Dorje invited him to join him at his hermitage, Garmo Cho Dzong (mgar mo chos rdzong) in Tashi Dzong (bkra shis rdzong), to the West of Zhigatse. Wensapa went to Garmo Cho Dzong when he had recovered from his smallpox, and there Cho Dorje gave him the full transmission of the Lamrim and the Ganden Oral tradition. From there Wensapa next went to a meditation cave known as Pema Chan (pad+ma can), a place also referred to as Pema O (pad+ma 'od) where he practiced these and other doctrines Chokyi Dorje had transmitted to him. There he lives as an Indian-style siddha, smearing his body with ash and sitting in seven-pointed posture for days on end. There has been some speculation that he also engaged in sexual yoga with a consort at this time. He also, at the age of twenty, practiced Guhyasamaja in the hermitage of Gyelwa Gyung (rgyal ba rgyung) in Drakgyawo ('brag rgya bo).

Wensapa gave his first dharma teachings at the hermitage of Pema O, and from then on taught extensively throughout the land, residing at various Geluk institutions in Tsang and U, including Drepung, where at the age of thirty-three he took complete ordination vows from Gendun Gyatso (dge 'dun rgya mtsho, 1476-1542), who would posthumously be known as the Second Dalai Lama. At Tashilhunpo (bkra shis lhun po) in Zhigatse he met Lekpa Dondrub (legs pa don grub), with whom he collaborated on in several of his compositions. At Sera monastery he received additional teachings and empowerments from Gendun Gyatso. Back in Tsang, he received teachings from Panchen Jangchub Lodro (paN chen byang chub blo gros), Ngari Lochen Namgyel (mnga' ri lo chen rnam rgyal) and Lekpai Lodro (legs pa'i blo gros).

Wensapa's most important disciple was Sanggye Yeshe, who became his primary lineage holder.

In 1566 Wensapa passed away. During the cremation of his body many miraculous signs are said to have appeared, including rainbows and flowers that fell from the sky. His remains were interred at Wensa monastery. Around 1641, his recognized reincarnation, Lobzang Chokyi Gyeltsen (blo bzang chos kyi rgyal mtshan, 1570-1662) was given the title of Panchen Lama by the Fifth Dalai Lama, Ngawang Lobzang Gyatso (ta la'i bla ma 05 ngag dbang blo bzang rgya mtsho, 1617-1682); Wensapa was thus posthumously given the title of Fourth Panchen Lama. 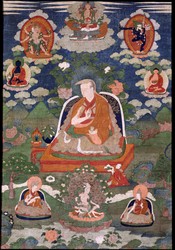 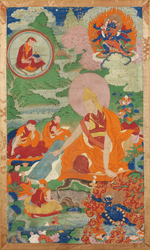 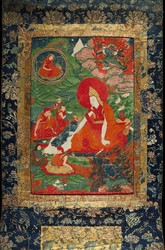 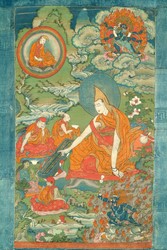 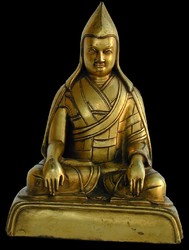 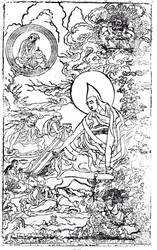