Lobpon Dudul was a tantric yogin with expertise in the practice of the Purbu Zeumuk Gu (phur bu ze'u smug gu), an early cycle of the deity Vajrakila, and the young Ngodrub Gyeltsen studied these doctrines together with those of the Ma¯ya¯ja¯la and Ma¯tarah? and so on under his tutelage. He is said to have demonstrated remarkable skill in both understanding and practice from a very early age, perfecting the sama¯dhi of Vajrakila by the time he was eight years old. Following the death of his father he continued to be educated by his mother.

According to legend, when he was eleven years old three feathery growths appeared on the top of his head; by the time he was twenty-three there were five. Because these growths looked like the feathers of a vulture, he became famous as Godkyi Demtruchen (rgod kyi ldem 'phru can), ‘the one with vulture’s feathers’, which is generally shortened to Godemchen. Later in life he became known as Rigdzin Chenpo (rig 'dzin chen po; maha¯vidya¯dhara) and this title has been held ever since by each of his successive incarnations.

In 1364 a lama by the name of Manglam Zangpo Drakpa (mang lam bzang po grags pa, d.u.) apparently revealed certain texts that prophesied another man was destined to reveal important treasures. The following year he entrusted these to a Vinaya master named Tonpa Sonam Wangchuk (ston pa bsod nams dbang phyug, d.u.) and two companions with the precise instructions to pass them on to "a yogin carrying a statue or rosary in his hand" who they would encounter to the east of Mount Zangzang and who would begin to engage them in a conversation concerning the king of Gungtang (gung thang), the legitimate heir of the ancestral rulers of Tibet.

The story continues that a week or so later, as the three travellers were eating a meal on the bank of a stream near Draklung Monastery (brag lung dgon) in northern Yeru (g.yas-ru), Godemchen arrived there from Namolung carrying in his hands a brass image of Vajrakila and a rosary. "Have you heard that lord Tashi De (bkra shis lde; the king of Gungtang) died today?" he asked. "This is not good. Has the very essence of the earth gone bad?" As he spoke, the three travellers recognized the fulfillment of Manglam Zangpo Drakpa's prophecy and so handed over all the treasure scrolls and a sealed letter of good wishes.

Upon his return to Namolung, Rigdzin Godemchen interpreted the rising of the planet Jupiter in the eighth lunar mansion (the lunar calendar's commemoration of the birth of the Buddha) as a sign that the time had come to take out the key to the treasures. At the first crack of dawn on the eighth day of the snake month in the year of the fire horse, 1366, there came from the east a beam of white light "like the trunk of the wish-fulfilling kalpalata¯" that struck the summit of Mount Trazang and a spot beneath that was indicated by a light fall of snow. Thus, from the vicinity of three stones markers (rdo ring) within a cavity of hard white rock beneath the summit, Godemchen unearthed the first of the Jangter (byang gter), or Northern Treasures, in the form of seven paper scrolls. In order to compensate for the removal of these scrolls, Godemchen buried another treasure in their place and the resultant cavity, known as Lungseng (rlung gseng) is reported to be still in existence today. During the new year celebrations of the following year, as Godemchen reached the age of thirty, a tree spontaneously grew up there which is also said to have remained until now.

A remarkably elaborate description of his next revelation describes how two months later, on the fourth day of the sheep month of 1366, Godemchen was engaged in bestowing the empowerment of Vajrakila upon his disciples. During the preliminary section of the rite, just as he was establishing the ma??ala of deities within the bodies of his disciples, he interrupted the rite and led his followers up into the mountains that looked like "a heap of poisonous snakes" (dug sbrul spung 'dra) to reveal treasure.

The hagiographies describe the air as sweetly scented and filled with rainbows as Godemchen guided his disciples to the southwest face of the mountain where the atmosphere glowed with ruby-red light in the splendor of the setting sun. They climbed up to a mountain cave and Godemchen went inside and began to pray, leaving two disciples, Lama Dopawa Sanggye Tenpa (bla ma do pa ba sangs rgyas bstan pa, d.u.) and Rigdzin Gonpo (rig 'dzin mgon po, d.u.) stationed beneath the entrance. As the sky grew dark following the setting of the sun, the rock cave began to tremor and shake as a sign that the master of the treasures had arrived. At midnight they lit a number of butter lamps and by their light the group was able to discern upon the rock the clear image of a crossed double vajra (vis´vavajra).

When Godemchen pressed beneath that mark with the symbolic key to the treasures, it opened like a door onto a triangular chamber within which they found a pale blue snake with a yellow belly, as thick as a man’s arm. It was lying in a coil with its face to the southeast upon a square blue stone, the top of which was marked in nine sections with silver colored nails so that it resembled the back of a tortoise. The coils of the snake looked like an enormous eight-sided precious stone and upon its heart were three gem-like excrescences from which were extracted a roll of paper and a jewel. Resting upon the blue stone slab, concealed within the serpent’s coils, lay a maroon leather casket, the fivefold repository of the Jangter.

From the central compartment of deep red leather, Godemchen took out the four volumes of the Kunzang Gongpa Zangtel (kun bzang dgongs pa zang thal), the central Dzogchen text of the Jangter. From within this section he also took out the teachings of Lama Rigdzin Dungdrub (bla ma rig 'dzin gdung sgrub) and other texts of tantric practice, together with the Dzogchen texts of Vajrakila, three kila daggers wrapped in maroon silk, thirty paper scrolls wrapped in blue silk, relics such as hair from the heads of Padmasambhava and his disciples, and other sacred articles.

The front (eastern) compartment of the box was fashioned of white conch shell and contained texts of the Gyudre Ladokpa (rgyu 'bras la ldog pa) cycle as well as teachings on the similarity of the awakened mind to the sky (dgongs pa nam mkha' dang mnyam pa'i chos) and the root tantra texts of the Kadak Rangjung Rangshar (ka dag rang byung rang shar) cycle concerning the natural presence and arising of primordial purity.

The golden southern chamber of the chest contained teachings on the fourfold practice of approach and attainment of the deity (snyen sgrub rnam pa bzhi'i chos) and the texts of the Sangdrub Guru Drakpo Tsel (gsang sgrub guru drag po rtsal) and Kagye Drakpo Rangjung Rangshar (bka' brgyad drag po rang byung rang shar). Also in this chamber were found texts relating to Vajrakila in his form as Mahottaraki¯la with nine faces and eighteen hands.

Within the black northern compartment of iron were found the most violent of all the wrathful ritual texts, including many Vajrakila texts, together with other teachings concerning "grinding the enemies and obstructers to dust" (dgra bgegs thal bar rlog pa'i chos), texts said to be as pernicious as the stem of a poisonous plant (dug gi sdong po lta bu). He also found there eight treatises on the compounding of ritual medicine (sman gyi tshad byas pa), as well as further commentaries and instructions on ‘thread cross rituals’ (mdos) but it seems that not all of these texts were transcribed and disseminated.

Deposited in the four corners of the cave were found to be precious treasures dedicated as offerings to the guardian protectors, including the four soul turquoises of the king and other jewels. These precious offerings were left undisturbed.

Taking away the five treasuries of teachings, but leaving undisturbed, the sources state, the many jewels and precious substances meant as offerings to the guardian deities, Godemchen organized each of the sections into one hundred and one parts and rearranged the folios of yellow paper into pairs like mother and son, marked with the seed-syllables of the four guardian goddesses of the gates. He then taught the doctrines contained therein to his chosen pupils.

These teachings became known as the Jangter in order to distinguish them from the Lhoter (lho gter), or Southern Treasures that had been revealed in previous centuries by Nyangrel Nyima Ozer (nyang ral nyi ma 'od zer, 1136-1204) and Guru Chowang (gu ru chos dbang, 1212-1270). Tibetan historians group these three men together as the body, speech and mind emanations of Padmasambhava.

Regarding Sikkim, in 1373 Rigdzin Godemchen is said to have worked several miracles there and blessed the "White Rock Cave" (brag dkar phug) of Tashi Ding (bkra shis lding) as a place for meditation. He is also said to have revealed treasure from the peak of Gangchen Dzonga (gangs chen mdzod lnga), a sacred mountain there.

Apart from the treasures which he himself revealed, Godemchen is credited with producing the inventories to treasures that would be revealed in the future by others.

In 1389, at the age of fifty-two, Godemchen was appointed the role of personal preceptor to the king of Gungtang, Trigyel Chokdrubde (khri rgyal mchog grub lde, d.u.), who gave him possession of the region of Riwo Pelbar (ri bo dpal 'bar) in Mangyul. As an offering to the sovereign, Godemchen presented a kila dagger called Sisum Dudul (srid gsum bdud 'dul), which he said had been used by Padmasambhava himself at Yangleshod cave in Nepal, together with other objects and teachings and empowerments. He is said to have reconcealed some of his treasure at Riwo Pelbar for later generations to rediscover. He also is said to have reconcealed treasure at Kyimolung.

During his time in Gungtang, Godemchen founded the monastery of Se Trazang (se bkra bzang dgon). This later became the seat of his son and heir to his lineage, Namgyel Gonpo (nam rgyal mgon po, d.u.), as well as the seat of a line of incarnations known as the Seton Lama (se ston bla ma).

Rigdzin Godemchen passed away in Zilnon (zil gnon), Sikkim, at the age of seventy-one in 1408, the year of the male earth mouse. The large number of teachings and special tantric precepts that he handed down to posterity were transmitted through three lineages known as the Mother, Son and Disciple lines. Roughly seventy-five years later a young charismatic lama, a holder of the Jangter tradition, Lekden Dorje (legs ldan rdo rje, 1452-1565), claimed to be the reincarnation of Godemchen. His reincarnation, Ngakgi Wangpo (ngag gi dbang po, 1580-1639), established Dorje Drak Monastery (rdo rje brag dgon) as the seat of the Jangter tradition, and took the title of Third Dorje Drak Rigdzin; Godemchen and Lekden Dorje thus became the First and Second Dorje Drak Rigdzin, respectively.

(This essay was adapted from Gathering The Elements: The Cult of the Wrathful Deity Vajrakila according to the Texts of the Northern Treasures Tradition of Tibet. Berlin: Wandel Verlag, 2013).

Martin Boord earned his PhD at the School of Oriental and African studies at the University of London in 1992. He has published widely on the topic of Vajrakila.

[Extracted from the Treasury of Lives, Tibetan lineages website. Edited and formatted for inclusion on the Himalayan Art Resources website. November 2016]. 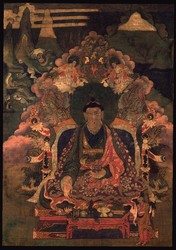 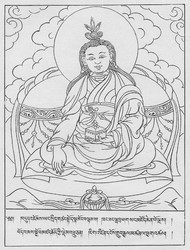