The wrathful protector Drashi Lhamo is regarded as a form of Shri Devi. She resides in the Drashi Gon temple in Lhasa, Tibet. The temple was originally constructed at the request of the Tibetan ruler Pholane Sonam Tobgye (1689-1747)in the mid 18th century and is located half way between the Barkor of central Lhasa and the sprawling Sera Monastery to the north-east. The temple was also in close proximity to the Chinese embassy of the time. Sera Monastery also has a small Gonkang temple in the Barkor surrounding the Lhasa Tsuglhakang. In this small temple there is included with the other minor protectors of Sera Monastery a clay image of Drashi Lhamo.

The name of the temple 'Four Monks' reflects the number of appointed staff who were selected from Sera Monastery nearby. The function of the temple and duties of the monks were to offer up prayers for the well being of the Qianlong Emperor (1711-1799) of China.

The special protector of the temple is known as Drashi Lhamo - Goddess of the Four Monks. Legend states that at one time in the not so distant past the four monks of Drashi Gon Temple noticed a deity flying in the sky from the direction of India and heading towards China. Through the power of their prayers they were able to invite the deity to their temple where daily offerings have been made ever since - and she has remained.

Drashi Lhamo is female, wrathful in appearance, dark blue in colour, with one face and two hands. The face is grotesque with three large bulging and bloodshot eyes. Her four canine teeth are bared and her long red tongue is extended out and downward in a lolling manner. Her two legs stand straight and the feet are in the shape of claws like a chicken. On the top of the head is a crown with skull and jewel ornaments along with a wide gold band similar to the headdress worn by various state oracles of Tibet. On the chest is a large silver mirror marked with the letter BHYOH (jo) further associating her with the deity Shri Devi. Drashi lhamo bears a strikingly similar resemblance to the famous mother goddess of Calcutta - Kali Ma.

Drashi Lhamo is commonly worshiped with offerings of alcohol. At the large sculpture in the main shrine room alcohol is poured respectfully in front of her. She is very popular with traders, merchants, truck drivers and travelers who believe that she is favorable towards them. She is also highly regarded for accuracy in divination. It is the monks that actually perform the divination ritual invoking the blessings of the deity. It is worth noting that the popularity of Drashi Lhamo grew significantly in the 1990s following the ban on the deity Dorje Shugden who was also popular with traders and merchants. 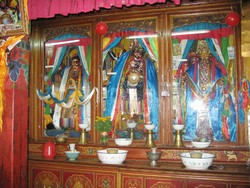 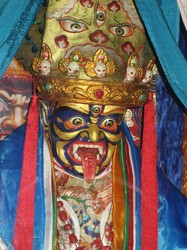 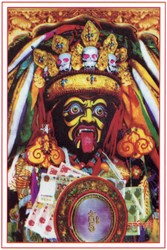