These two 13th century paintings are early examples of copying a composition. They are not facsimiles because they are not exactly the same in specific figural proportion and colour. They are not traced. They are however exact in the number of figures and their arrangement and placement in the composition. Similar early copies can be seen with Taglung style paintings of early teachers such as Pagmodrubpa.

True facsimiles and wholesale reproduction of works began in the 17th and 18th centuries with the use of block print images (parma) with the carving based on previously painted models. The most well known of these block print sets are the Life Story of Tsongkapa, the Panchen Lama incarnations and the Dalai Lama incarnations. Initially sets were the most common production runs followed by individual prints of various popular subjects. Famous Printing houses were located at Nartang, Zhol, Dege and Labrang. 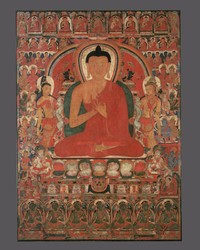 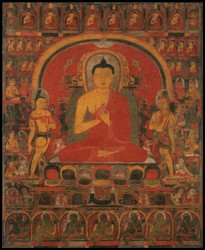