Avadana Painting #2 [1] containing stories #1-3.
(1) The Awakening of King Prabhasa.
(2) The Generosity of King Srisena.
(3) King Manicuda's Perfection of Giving. Painting #10 [9] containing stories 34-38. (Comparables: HAR #30, #89106).
34. The Nagas Nanda and Upananda, Maudgalyayana subdues two troublesome nagas.
35. The Householder Sudatta, several stories about the virtue of pure generosity.
36. Ghosila, The Honest official, further stories about the virtue of gift giving.
37. Purna's Power of Virtue, an illigitimate child grows up, renounces worldly life, becomes a monk and then an arhat.
38. Mukapangu, The Idiot Cripple, a prince is faced with many difficulties while trying to become a monk.
Painting #13 [12] containing stories 49-54. (Comparables: HAR #251, #65557, #90006, #3314422).
49. Hastaka's Good Fortune, a story about cause and effect. At the upper center, beneath a tree, the Buddha Shakyamuni explains why the youth Hastaka possesses a golden elephant.
50. Performing the Ten Actions, a story about cause and effect. Sitting in a city park, with the Vulture Peak mountain behind and above, the Buddha relates ten stories about actions and results.
51. The Lady Rukmavati in a story about generosity gives away her two breasts and a Brahmin youth feeds his body to a mother tigress.
52. Adinapunya Offers His Life, a story about generosity involving kingdoms, battles and greed.
53. Subhashitagaveshin, seeker of Wisdom, searches his kingdom for a teacher rich in wisdom.
54. Sattvaushadha's Power of Healing, a story about the perfection of meditation, a healing pond and the relief of suffering.Painting #16 [15] Stories 67 through 71. (Comparables: HAR #65587, #3314420).
67. Sangharakshita's Spiritual Journey.
68. Padmavati's Ordeal.
69. Consecration of the Dharma King.
70. The Arhat Madhyantika in Kashmir.
71. Shanavasika's Humility.

[Story names from Leaves of the Heaven Tree, the Great Compassion of the Buddha by Padma Chopel, 19th century. (Based on the Bodhisattvavadanakalpata of Kshemendra, 11th century). Translated by Deborah Black. Berkeley: Dharma Publishing, 1997]. 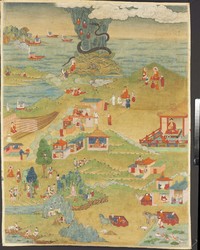 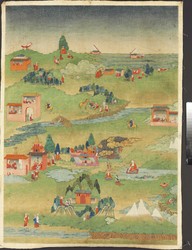 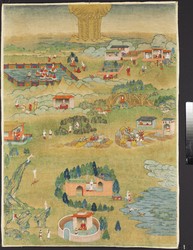 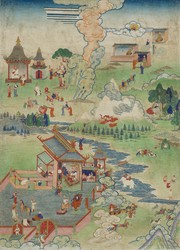