Only two paintings from this set of twenty-six or more compositions are currently known. The total of twenty-six is based on the possibility that the last image is of the 7th Dalai Lama. This set is quite unique because each composition depicts the life story of each central incarnation figure. The center composition is likely the current Dalai Lama when the set of paintings were commissioned. Currently there are only two known Works: Lama Shang Yudragpa (left four) and Ngagwang Lobzang Gyatso, 5th Dalai Lama (left ten). 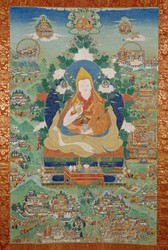 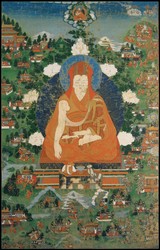