There are several systems enumerating the names and locations of the Tantric Buddhist twenty-four Pithas. The two most well known systems are from the Hevajra Tantra and Chakrasamvara Tantra. In the Hindu religion the names and number of the Pithas can be found in the Brahmanda Purana, Mahapitha Purana and the Shakti Pitha Stotram by Shankaracharya (9th century).

Currently the only known references to the twenty-four Pithas in Himalayan art are found in the painting set of the Secret Biography of the 7th Dalai Lama. Three of the compositions from a set of seven paintings depict eight yogis each. The eight in total represent the twenty-four pithas. Some of the paintings have inscriptions naming each of the pithas accompanied by a geological feature symbolic of the related body part or representing a play on words between the name and meaning. HAR image #46911 is the best example for both inscription and geological feature.

(The Concealed Essence of the Hevajra Tantra with the Commentary Yogaratnamala. G.W.Farrow & I. Menon. Motilal Banarsidass Publishers, 1992. Part 1, chapter 7, pages 76-77). 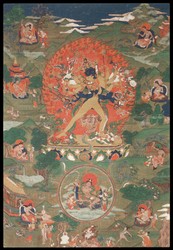 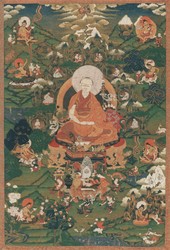 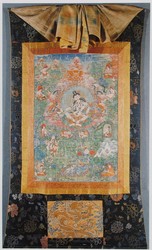