According to the writings of Jonang Taranata, Virupa holds a horn in his left hand filled with alcohol. Typically Virupa would hold a skullcup in the left or right depending on which hand is upraised in a wrathful gesture. Two of the images below are part of an eleven painting set (respectively) created in the New Palpung style of painting.

The depictions of the Eighty-four Mahasiddha of the Abhayadatta System are based on the documented descriptions of Jonang Taranata (1575-1635) as commissioned and painted as murals in the Puntsogling Monastery, Tibet, and documented in a descriptive text. (Text title: grubs thob brgya bcu rtsa bzhi'i 'bri tshul bzhugs so). 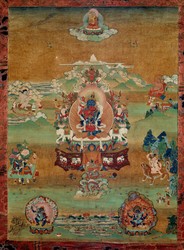 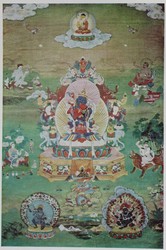 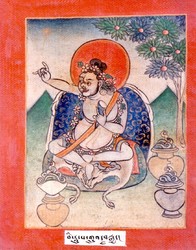