There are a number of other forms of Guru Dragpur that have been discovered after the original discovery of Padma Karpo. An example is the three faced six armed Drigung form of the deity. Padma Karpo was not the first person to put a kila peg on the lower torso of a deity. Aside from the early examples from the Vajrakilaya depictions we have the Bon example with Purba Drugse Chempa. There are also the early 'Pure Vision' examples of Simhamukha with a kila lower body originating with a teacher from Bodong Monastery, later followed by Longsal Nyingpo and his discoveries.

Description: Very wrathful in appearance, Guru Dragpur is red in colour, with one face and three round eyes, he has a gaping mouth with bared fangs and flaming hair rising upward. The right hand held aloft firmly grasps a gold vajra scepter and the left a black scorpion - both arms extended to the sides. Adorned with a crown of five skulls, gold earrings, bracelets, necklaces and a snake garland, he wears a string of human heads. An elephant hide covers the shoulders with a tiger skin wrapped about the waist. Without legs, the lower body is composed of a large black kila (Tibetan: phur ba), three edged peg, extending downward from the gaping mouth of a makara sea creature. Standing on a triangular base adorned with skulls, above a sun disc and lotus blossom, he is surrounded by the swirling flames of pristine awareness. 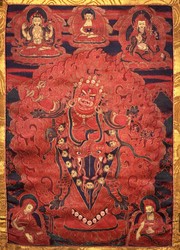 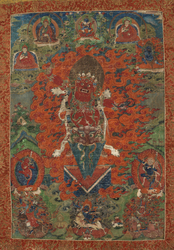 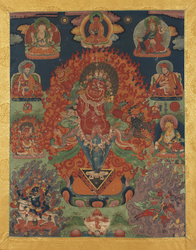 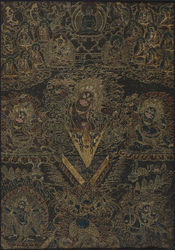 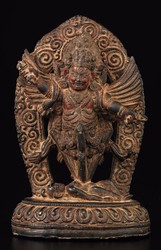 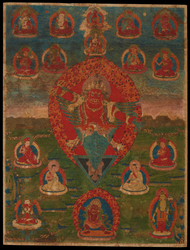 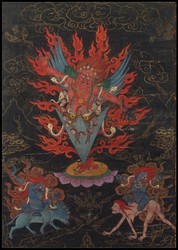 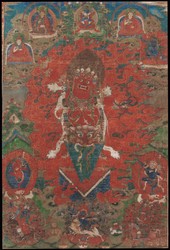 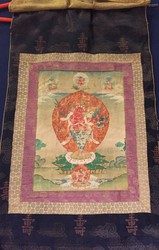 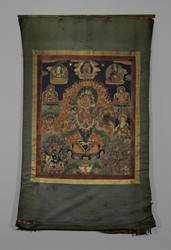 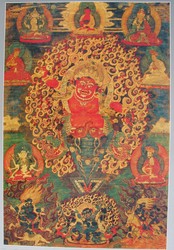