Here is "The Story of Tapihritsa" as told by Yongdzin Tenzin Namdak Rinpoche (excerpted from the edited transcript of his oral teachings translated by Geshe Tenzin Wangyal Rinpoche). Knowing the details of Tapihritsa's very real life makes the "Invocation of Tapihritsa," an offering composed and sung by Nangzher Lopo, Tapihritsa's student, all the more inspiring! Tapihritsa was an ordinary person from a nomadic family in the country of Zhang Zhung. The main teacher of Tapihritsa was Dawa Gyaltsen. Tapihritsa practiced for nine years before he attained illumination. The place where he practiced is a holy place outside Mount Kailesh, a place called Senge Tap. After nine years of practice there, Tapihritsa achieved the rainbow body. Tapihritsa was a contemporary of the king of Zhang Zhung, Ligmincha, and the king of Tibet, Trisong Detsun, and other famous yogis of Bon. Nangzher Lopo was a very famous master, a knowledgeable and very accomplished practitioner, famous at that time in Zhang Zhung. Later he became the main student of Tapihritsa. Even though Tapihritsa had been taught by Nangzher Lopo before, Nangzher Lopo had had a problem with pride and had not been fully realized. Therefore, at this time, Tapihritsa emanated as a young boy and came down to the village where a rich man, Yungdrung Gyal, the main sponsor of Nangzher Lopo, lived. Tapihritsa came in the form of a young boy seeking employment in the family of Yungdrung Gyal, and he served them for a number of years. Nangzher Lopo was meditating on a mountain where there were bushes, and Tapihritsa was taking care of the family's animals. These very places can be identified today in the Western part of Tibet. Today when people go to these powerful places they have a lot of experiences and visions. Some people who don't know the history of the place think they are seeing ghosts or something.

Tapihritsa was carrying a lot of wood in his bag for cooking food. He went to visit Nangzher Lopo to pay respect. Nangzher Lopo hesitated when he saw the behavior of this young boy. The way he was paying respect seemed special and mature, and he thought, "Who is this guy?" So Nangzher Lopo said to the boy that it looked like he had worked through some doctrines and tenets. He asked him, "Who is your teacher and what is your practice? What are you carrying? Why are you behaving this way?" The young boy said, "My teacher is this vision. Visions are my teacher. My practice is thought-less, my meditation is all sentient beings. What I am carrying is my thoughts. I am behaving like this because I am a servant of the family of samsara." Since the young boy answered in that way, Nangzher Lopo was surprised and they entered into a debate. Nangzher Lopo said, "If these visions are your master, it probably means you don't have a master; if your meditation is thought-less, you don't need food; if you are meditating on sentient beings, that means you are enlightened; if you are carrying thoughts, you don't have desire; and if you are a servant of samsaric beings, you don't suffer!" The young boy answered again (and in this debate the teachings have already begun). "If you don't realize that vision is your master, who taught Samantabhadra?" asked the young boy. "My practice is thought-less because in the base there is no thought, and when there is a thought, there is no practice. I am meditating on all sentient beings because I don't separate or discriminate among others, because if one is discriminating there won't be meditation. I am carrying thoughts. That means I don't have thoughts. Because I don't have thoughts, I don't have desire. I realize that everything is illusion. I help all sentient beings because I don't make a distinction between suffering and not suffering."

Then the debate continued. "If you are that good," says Nangzher Lopo, "we need to go in front of the king and debate. If you win, you will become my master. If I win, you will be punished by the king." Tapihritsa had a big laugh. "All karma and conditions, causes and results are false." Basically, he was teasing Nangzher Lopo, saying, "All these meditators are prisoners of thoughts; they keep thoughts in a prison and are prison guards! All these intellectuals who debate don't realize they cast a net in the darkness. All these discussions are like a joke and a play, a weapon of words. All the sacred tantras are merely elaborations of one's mind. All these knowledgeable persons are meaningless - they know and have no experience." So he was teasing, saying, "These great views are bubbles of words - all these things are meaningless and make no sense. The real condition cannot be changed. The real essence cannot be practiced. Self arising wisdom cannot be obscured. When you realize, you cannot re-realize or try to realize again. So what is the matter? Who is complaining?" Now Nangzher Lopo was getting a bit irritated and realized this was not just a boy, but a special person. He was shocked and could almost not speak. In that moment of shock and surprise, he looked at the young boy who was sitting up in space and that is how we draw him - in space and in the rainbow. So Nangzher Lopo was really sad, realizing all this bad karma he had created by having the wrong view. He did prostrations and confession, realizing the boy was a manifestation of his teacher. Then he requested the teaching. Right at that moment, the owner of all the animals, Yungdrung Gyal, came and saw this discussion. He said, "What are you doing there all this time? Where are all the animals?" So immediately Nangzher Lopo - who knew Yungdrung Gyal very well - said, "What bad karma we created! You put the master as a servant and I said all these things to him!" Yungdrung Gyal went into shock. Those shocks are good. When you wake up, you are in a different place. So the young boy went up into space and said, "I am Tapihritsa and I came especially for you."

So this is the story. Then Tapihritsa began teaching Yungdrung Gyal and Nangzher Lopo. He said, "Listen carefully and do not be distracted." So both were clearly listening. Do you understand who Tapihritsa is now? This is not just a story; it is a fact; it happened. It happened during the seventh or eighth century. The teachings are the Dzogpa Chenpo, the Great Perfection. The result is the rainbow body. There is no doubt. If there is doubt in you, it is your karma. (Actually, Tapihritsa asked them to listen carefully, but at the same time he was speaking to all beings, and Lobpon is saying that basically he is talking to all of you.) 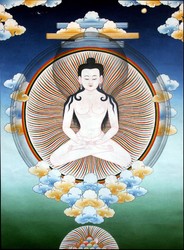 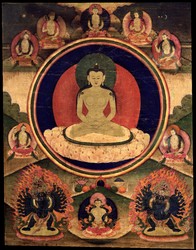