Ratna Lingpa (rat+na gling pa) was born in 1403 into a wealthy family in Drushul, Lhodrak (lho brak gru shul). His father was Dode Dar (mdo sde dar) and his mother was Sitar Men (sri thar sman). He was said to have been an incarnation of Langdro Konchok Jungne (lang gro dkon mchog 'byung gnas), one of the twenty-five disciples of Padmasambhava. A child prodigy, Ratna Lingpa learned reading and writing effortlessly and had numerous pure visions, starting from the age of ten.

According to tradition, when Ratna Lingpa was twenty-seven, he experienced a vision of Padmasambhava in the form of a yogi dressed in yellow raw silk. He showed him three scrolls, a white, a red and a blue one, and asked Ratna Lingpa to choose one of them. Ratna Lingpa answered that he wanted all three. Because of the auspicious connection created by his answer, Ratna Lingpa received all three inventories, and was able to reveal in a single lifetime the termas he would have otherwise revealed in three successive lifetimes. He is therefore also known as Zhikpo Lingpa (zhig po gling pa) and Drodul Lingpa ('gro 'dul gling pa).

Starting at the age of thirty he revealed treasure across southern Tibet, at Khyungchen Drak (khyung chen brag), Dritang Koro Drak ('bri than ko ro brag), and Kharchu Pelgi Puk (mkhar chu dpal gyi phug), a total of twenty-five separate revelations on diverse topics such as peaceful and wrathful guru, Dzogchen, and Mahamudra. Among the cycles that continue to be practiced are the long-life cycle of the Tsedrub Sangdu (tshe sgrub gsang 'dus) and the Purba Yangsang Lame (phur pa yang gsang bla med).

In response to Buton Rinchen Drub's (bu ston rin chen grub, 1290-1364) exclusion of major Nyingma tantras from his influential Kangyur (bka' 'gyur), Ratna Lingpa gathered together the tantic heritage of the Nyingma tradition, a work said to comprise forty-two volumes. It is said that this collection, no longer extant, was the basis for the Nyingma Gyubum that Jigme Lingpa ('jigs med gling pa, 1730-1798) assembled in the 1770s. 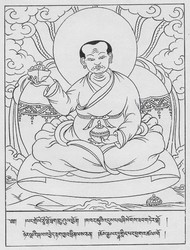