At the age of five Ngawang Kunga Sonam began studying reading and writing with his father, from whom he received empowerments and transmissions in Vajrakīlaya, Cakrasaṃvara, Hevajra, and other Sakya tantric traditions. The boy was said to have a serious and peaceful demeanor, and earned that name "Amnye Zhab", or "Grandfather." Around this time his father invited the Thirteenth Ngor Khenchen Namkha Pelzang (ngor mkhan chen 13 nam mkha' dpal bzang, 1532-1602) to give empowerments and transmissions to the entire family.

In 1602, at the age of six, Amnye Zhab ascended to the seat of Ducho Labrang under the supervision of his uncle and his father. His father invited Sonam Pelwang (bsod nams dpal dbang, d.u.) to tutor him in reading and writing, and to supervise his memorization of daily Sakya prayers. Together with his two brothers, Tutob Wangchuk (mthu stobs dbang phyug, 1588-1646) and Ngawang Kunga Wanggyel (ngag dbang kun dga' dbang rgyal, 1592-1620), he received further transmissions and empowerments, including his first Lamdre transmission, in 1607. In 1609, at the age of twelve, he entered into a retreat for six months with his uncle, father, and brothers.

In 1611, at the age of fourteen, Amnye Zhab composed one of his earliest works, verses praising the wisdom of Sakya Paṇḍita Kunga Gyeltsen (sa skya PaN+ Di ta kun dga rgyal mtshan, 1182-1251). The third month of that year he received lay and novice ordination from his uncle at Sakya U-tse (sa skya dbu rtse), the main temple at the Sakya monastic complex. The following year he composed verses on the occasion of his elder brother, Tutob Wangchuk's departure on pilgrimage to Kham.

When he turned seventeen his mother, Sonam Gyelmo passed way and his brother returned from Kham for the funeral.

The following year, in 1614, Muchen Sanggye Gyeltsen (mus chen sangs rgyas rgyal mtshan, 1542-1618) assigned him to the abbacy of the Sakya monastery of Lingga Dewachen (gling dga' bde ba chen), which had been founded by Muchen Sempa Chenpo Konchok Gyeltsen (mus chen sems dpa' chen po dkon mchog rgyal mtshan, 1388-1469) in 1437. Residing there for three years, he receive many teachings and transmissions from Muchen Sanggye Gyeltsen, thereby ensuring that the distinguished lineage of Muchen would continue. At the end of this first period of study at Lingga Dewachen, Muchen, having been invited to teach in Ngamring, sent Amnye Zhab on a teaching tour in his stead.

He returned to Sakya around the year 1615, and settled at the Zhitok Labrang (bzhi thog bla brang), which he made his residence from that point onwards. At that time his father pressured him to return his novice vows and take a wife in order to ensure a male heir for the Khon line. Unable to either obey or refuse, he returned to Lingga Dewachen for more studies with Muchen Sanggye Gyeltsen, including further Lamdre teachings and transmissions.

He soon returned to Sakya to participate in a Vajrakīlaya ritual at the request of his father, after which he returned again to Lingga Dewachen. During this time, still in his early 20s, he composed a work on Hevajra.

Returning to Lingga Dewachen again in 1618, he continued his training with Muchen, who gave him authorization to teach Lamdre. He also received a number of empowerments and transmissions from other illustrious teachers, including Khenchen Zopa Gyatso (mkhan chen bzod pa rgya mtsho, d.u.), Khenchen Jamyang Chozang (mkhan chen 'jam dbyangs chos bzang, d.u.) and Chokyong Dorje (chos skyong rdo rje, d.u.). Amnye Zhab discussed the issue of his ordination with Muchen, and explained his father's wish that he take a wife and assume control of Sakya. Muchen took the position that Amnye Zhab's brothers could produce an heir, and then gave him full ordination, with the participation of the above lamas. He then transmitted the pañcakrama system of the Guhyasamāja tantra and other teachings.

On the eighteenth day of fourth month of the same year, Amnye Zhab's father passed way and he returned to Sakya for the funeral. With his brothers, he supervised the construction of the reliquary that was installed in the Rigdzin Lama Gyupai Tsuklakhang (rig 'dzin bla ma brgyud pa'i gtsug lag khang) at the Zhitok Labrang. His elder brother, Ngawang Kunga Wanggyel, had become the twenty-seventh Sakya Trichen the year before.

Amnye Zhab returned again to Lingga Dewachen to receive more teachings from Muchen. This was the last time the two met; soon after Amnye Zhab returned to Sakya, to practice Cakrasaṃvara at the Demchok Podrang (bde mchog pho brang) at Chimik Dzingkha (chu mig rdzing kha), he received word that Muchen Sanggye Gyeltsen passed way. He interrupted his retreat to perform funerary practices, and then returned to the retreat.

In 1619, at the age of twenty-three, Amnye Zhab went on pilgrimage to Lhasa on the invitation of Namkha Dzodma (nam mkha' mdzod ma), the wife of the chieftain of Uru, the Yargyabpon (yar rgyab dpon). During the same time he visited Shigatse at the invitation of the Tsang Desi, Karma Puntsok Namgyel (karma phun tshogs rnam rgyal, 1597-1621), to whom he gave initiations at the Samdrub temple (bsam 'grub). During this period the Desi was consolidating his power in the region, conquering neighboring kingdoms and territories, many of them, such as Uru, which were patrons of Sakya.

Back in Sakya he furthered his studies under the guidance of Khenchen Ngawang Chodrak (mkhan chen ngag dbang chos grags, 1572-1641).

In 1620, Amnye Zhab's brother Ngawang Kunga Wanggyel passed way. In response to the requests of his uncle and the Sakya community, and the command of the Tsang Desi Karma Puntsok Namgyel, he returned his ordination vows and assumed the throne of Sakya, becoming the at the twenty-eighth throne-holder at the age of twenty four.

In 1622 Puntsok Namgyel's son and successor, Tsang Desi Karma Tenkyong Wangpo (gtsang sde srid karma bstan skyong dbang po, 1606-1642) invited Amnye Zhab to Shigatse's Samdrub Monastery, which was built by Tangtong Gyelpo (thang stong rgyal po, 1361-1485). He offered the ruler and his retinue a Vajrakīlaya transmission and a ritual for preventing harm. On the occasion there the Desi announced a tax and corvée labor exemption for all monasteries of Sakya.

Over the next decade Amnye Zhab taught Lamdre and other topics at Sakya and in Shigatse to the Tsang Desi, furthering that important relationship. He composed numerous works, including his history of the Lamdre transmission (1621), and Khon lineage (1629), and commentaries on the works of earlier Sakya masters. He furthermore undertook a number of repairs to Sakya monasteries, and established the Lima (li ma) and Gyanak (rgya nag) temples.

This work continued in the next decade, the 1630s; he spent time giving transmissions and teachings in Shigatse and other locations and composing explanations and histories of various tantric systems, including Cakrasaṃvara, Vajrabhairava, Kālacakra, and Hevajra.

In 1638, when he was forty-two, he was invited by the Tsang Desi to Ngamring (ngam ring) to perform rituals for preventing an invasion; presumably in response to rising tensions between Tsang and U.

At the age of forty-three, following the Tsang Desi's invasion of Bhutan, Amnye Zhab went to Shigatse and attempted to negotiate an end to the conflict. During his time there he resided at Samdrub.

In 1641, when Amnye Zhab was forty-five, Gushri Khan invaded Tibet at the request of certain Geluk patriarchs. He laid siege to Shigatse, destroying the Tsang kingdom and laying the foundation for the Fifth Dalai Lama, Ngawang Lobzang Gyatso (ngag dbang blo bzang rgya mtsho, 1617-1682), to take control of Tibet. It is said that because of the historical connection between the Sakya tradition and Mongolia, Sakya did not sustain significant damage. However, the center of Tibetan power now shifted out of Tsang over to Lhasa, and with the death of the Tsang Desi Sakya lost an important patron.

When Amnye Zhab was fifty, in 1646, his remaining brother, Tutob Wangchuk, passed way suddenly, and in his grief he supervised the construction of a reliquary.

That same year he went to Bhutan to negotiate a cessation to conflict among warring factions there, and he remained there for about a year.

In 1651 he stepped down from the office of Sakya Trichen and elevated his son, Ngawang Sonam Wangchuk, to the seat of Sakya as the twenty-ninth Sakya Trichen.

At the age of fifty-eight, in 1654, Amnye Zhab went to Shigatse where he met the Fifth Dalai Lama.

Amnye Zhab continued his peace-making activity to the end of his life; in 1657 he went again to Shigatse to negotiate a truce between the Ganden Podrang government in Lhasa and the Bhutanese. He went to Lhasa in 1658-1659 and again met the Fifth Dalai Lama. He returned to Sakya via Samye, where he sponsored some repairs and gave teachings.

At the end of 1659 he fell ill, and in 1660, the iron-bird year of the sexagenary cycle, he passed away. Ngawang Sonam Wangchuk and other Sakya patriarchs organized the funeral ceremonies, which lasted four months. A reliquary made of gold and silver was completed the following year.

Five volumes of his compositions were carved at Derge. Thirty additional volumes of manuscripts were discovered at Sakya in 1990 and published in 2000, in Katmandu.


Tsering Namgyal is a scholar in Xining. Published June 2011. 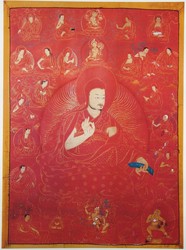