It is well understood that the two sculptural figures of Vajrasattva and Vajrapani in a peaceful appearance are routinely confused with one another and commonly conflated under the identification of Vajrasattva. There is also confusion with some Tantric forms of Akshobhya appearing in an identical manner to Vajrasattva with the consort seated on the left lap. The real difficulty arises when there is a consort included as part of the sculpture.

With paintings, aside from the vajra and bell in hand, the body colour of the deity is generally the most important indicator of identity. Akshobhya is blue. Vajrasattva is white. Vajrapani can be blue, green or white. However, with sculpture there is no colour and therefore it is not always so easy to come to a clear determination of identity.

When Akshobhya Buddha appears in Sambhogakaya appearance with a consort seated on the left thigh it is generally part a set of paintings, or sculpture, depicting each of the Five Symbolic Buddhas in identical posture with a consort, each with their own hand attributes and specific body colour. For the images below, number 86562, the central figure is a blue Akshobhya with consort. For number 85082, it is most likely to be a Vajrasattva with consort. However, number 74008 is more problematic. Is it Akshobhya from a set of five paintings depicting the Five Symbolic Buddhas or possibly a form of Vajradhara with consort? Sculpture number 20382 is even more difficult to identify. Is it Akshobhya, Vajrasattva or a form of Vajrapani with a consort? 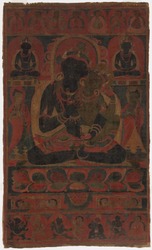 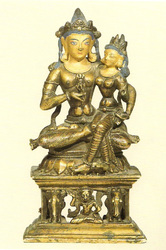 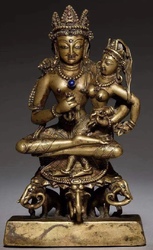 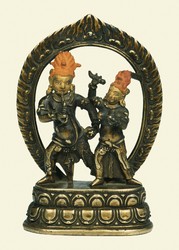 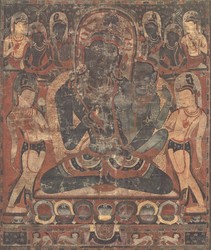 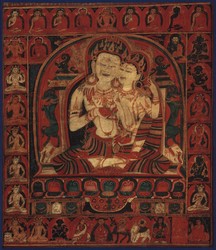 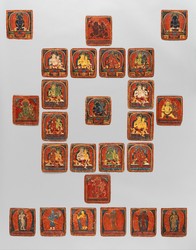 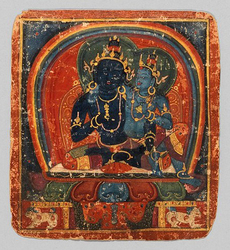