These four sculpture (below) all appear to be created in the same style and likely in the same 17th or early 18th century workshop. The single bodhisattva figure belongs to a private collection while the other three belong to the Palace Museum, Beijing, China. It is possible that they were created by a workshop associated or exclusive to the imperial palace. The principal characteristics for grouping these subjects together are the unique feature of the layered metal petals surrounding the base and the similarities of the head ornaments and crowns. There does not appear to be an iconographic relationship or program with these few examples. It is possible that they all belong to a much larger series of figures representing an array of important Mahayana and Vajrayana Buddhist deities.

Bodhisattva Figure (unidentified): belonging to a series of four known sculptural works. The other figures are Amitayus Buddha, Vajradhara Buddha and Green Tara.

Figurative art is the dominant subject in Himalayan style sculpture. The figurative subjects can be divided into two main categories, persons and deities. The persons can be further divided into historical figures and transcendent figures. The transcendent figures appear to be human and either male or female. In Himalayan art terminology these types of figures are called 'Peaceful Appearance.' In orthodox Buddhist terminology they are often referred to as a 'bodhisattva' which is a unique class of subject originating in the Mahayana literature of Indian Buddhism. The role of the bodhisattva is to represent the realized or enlightened students of Shakyamuni Buddha. The reference to 'enlightened' means that they have graduated sequentially to one of ten levels, often called grounds, of spiritual realization leading ultimately to complete buddhahood. Of course all of this information is essentially abstract and not easily understood when looking at a figurative sculptural object. It is very common in the study of Himalayan art to confuse Buddhist technical terms which are abstract and Himalayan art technical terms which refer specifically to overall appearance and visual characteristics.

What is apparent to the eye is simply a depiction of a seated male figure, peaceful in appearance and wearing a crown. The hands and feet are arranged in a particular manner. The two hands perform a gesture at the heart that represents the turning of an eight spoked-wheel. This gesture is almost exclusively used by Buddhist artists and described in Buddhist iconographic texts. For both hands, between the thumb and index finger is held the stem of a flower blossom extending above the two shoulders. The flower blossoms are also symbols representing purity and enlightenment. Hand objects, be they flowers or other symbols, such as a sword, vajra scepter, or vase, are referred to as attributes, or hand attributes. The two legs are crossed right over left making for a very firm and stable seat used particularly for extended periods of meditation practice. This is known as the 'vajra posture' named after the location at which Shakyamuni Buddha reached enlightenment. The term 'vajra' also refers to the specific type of meditation, 'vajra samadhi,' employed prior to reaching enlightenment.

The face is serene with slightly closed eyes and no facial hair. The head is adorned with a crown of five leaves, earrings and three types of necklaces, a choker, short necklace and a long necklace. Inset stones adorn the jewelry. The limbs are decorated with armlets, bracelets and anklets. A long narrow scarf covers the shoulders and the arms. A thin patterned lower garment is fastened at the waist. The figure sits atop a large lotus flower with multiple rows of petals topped with a ring of beads representing the pistil and stamins of the flower. At times it can be very difficult to recognize the differences between male and female figures as they essentially wear the same jewelry, clothing, and sit in similar postures with comparable hand attributes and gestures. Both male and female figures are patterned after descriptions of classical Indian gods that are described as in the prime of youth and sixteen years of age.

Because the identification of this figure is not known it therefore becomes difficult to comment on the specific context and function. The original quality and current condition are both very good and make it likely this was an imperial court commission. There are signs of normal wear and abrasion on the surface and the finial at the top of the head appears to be missing. Three other figurative works undoubtedly from the same workshop are identified in the Palace Museum collection in Beijing, China. Of the four known works this unidentified figure is in the best condition and the best example of this Kangxi period imperial style. 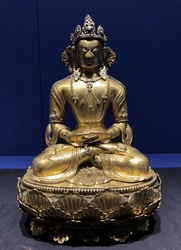 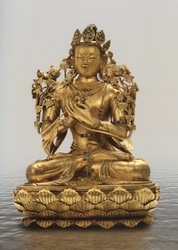 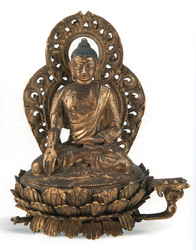 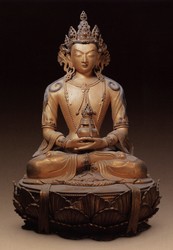 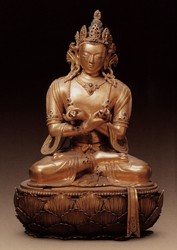 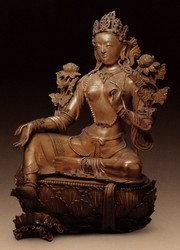 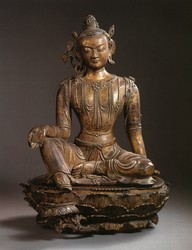