White in colour with 1000 faces, 1000 hands, 1000 legs and 10,100,000 (ten million one hundred thousand) eyes. The main face in front is white with 199 white faces above, to the left is a vertical row of yellow faces, to the right is a vertical row of green faces, on both sides are red faces and on top of those are 200 more blue faces. Each face has three eyes and each set of coloured faces displays a different expression. In the first pair of hands the right holds a Dharma Wheel in the Refuge Giving mudra (gesture) and the left holds an arrow together with the handle of a parasol, held to the heart, unfurled above on the right side. She is adorned with various jewel ornaments and wears upper and lower silk garments of assorted colours.

A further 99 pairs of hands hold in the right a Dharma Wheel and an arrow in the left. The remaining 400 hands on the right hold a vajra, jewel, lotus and vishvavajra (double vajra), 100 of each object. The remaining 400 hands on the left hold a bow, sword, lasso and hook, again 100 of each object. The 500 legs on the left side are extended above worldly deities and a host of animals and the legs on the right are bent and press down on all worldly troubles, daemons and animals. All the limbs and parts of her body are covered with large staring eyes, flashing like lightning, earnestly longing out of compassion for sentient beings. She stands upon a lotus and is completely surrounded by the flames of pristine awareness.

One Face, Two Arms:
"...atop a lotus, moon and sun seat is Sitatapatra with one face and two arms. The right hand holds a wheel and the left a white parasol; seated with the legs in vajra posture, adorned with silks and jewel ornaments, having a slightly peaceful and fierce expression." [bod brgyud nang bstan lha tshogs chen mo bzhugs so. Page 709].

Three Faces, Eight Arms:
"...above a lotus and moon seat is Bhagavani Sitatapatra with a body white in colour, three faces and eight arms. The main ace is white, right blue and left red. Each face has three eyes. The right hands hold a parasol, wheel, hook and arrow. The left [hands hold] a victory banner, vajra, lasso and bow. The hair is piled on the head. [She is] adorned with silk clothing and jewels; seated in the vajra posture." [Page 709].

Three Faces, Six Arms:
"...Arya Sitatapatra, white, with three faces and six arms. The main face is white, right face blue, left face red; having three eyes. The first pair of hands hold a vajra and white wheel. The middle pair [ hold] an arrow and bow. The lower pair [hold] a hook and a wrathful gesture together with a lasso. Wearing heavenly jewels and clothing, the legs are seated in vajra posture." [Page 710].

Three faces, Six Arms:
"...Arya Sitatapatra with a body white in colour, three faces, and six arms. The main face is white, right face blue, left face red. The first pair of hands hold a wheel and wrathful gesture. The middle pair [hold] an arrow and bow. The lower pair [hold] a hook and sword. The hair is piled on the top of the head; having three eyes, with jewel [ornaments] and silk clothing, seated in sattvasana posture. Behind the arms on the right and the left are the Three Bhagavan [Mahakala] Brothers, dark blue, with one face and two arms. The right [hand] holds a curved knife and the left a skullcup to the heart cradling in the bend of the elbow a sandalwood staff. Wearing a black silk cloak and felt boots, and a crown of skulls, [they each] stand in a fierce manner in the middle of a blazing mass of fire." [Page 711]. 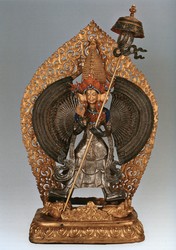 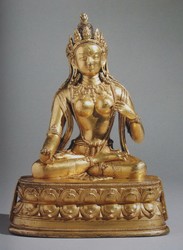 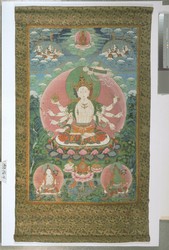