In painting, Chaturmukha Mahakala is typically depicted in his form known as the Accomplishment. In this form he has four faces, four arms and two legs. The main face is blue-black and the right white and the left red. The top face is smokey coloured. The first pair of hands hold a curved knife and a skullcup. The second pair of hands holds a raised sword in the right and a spear in the left. The right leg is bent and the left straight standing atop a prone corpse-like figure. Standing in front, ghoulish in appearance, dynamic in posture, are the four attendant dakinis; Dombini, Chandali, Rakshasi and Singhali Devi - black, red, yellow and green in colour. This is the description for the main form of the deity that appears most often in art.

Chaturmukha also has a number of different variations in form and function. The body colour can change according to activity such as white for long-life, yellow for wealth and red for power. The objects in the hands can change and the colours of the four dakinis along with their hand objects can change. There is also a form of Chaturmukha that has four demon heads. Most commonly these variations in form are only found as depictions in sets of Initiation Cards.

A Short History of Chaturmukha & Brahmanarupa Mahakala: When the great Tibetan Translator Nyen Lotsawa received the Manjuvajra Guhyasamaja (also known as the Jnanapada Lineage) empowerment from the dakini Risula, she also bestowed the initiation of the Mahakala (Chaturmukha) in the special form according to the Guhyasamaja Tantra. At this time she gave him as a servant a dark skinned Brahman. When Nyen Lotsawa and the Brahman reached Nepal the servant changed appearance and took on the form of a monk, an appearance more conducive for travelling in Tibet. After the passing of Nyen Lotsawa the monk remained with Lama Nam Ka'upa and then later with Sachen Kunga Nyingpo.

Brahmanarupa Mahakala is none other than Chaturmukha Mahakala of the Guhyasamaja Tantra. In his wrathful appearance he is black in colour with four faces and four hands, surrounded by the four dakinis. In the Sakya School it is inappropriate to show the wrathful form to anyone who has not received the initiation. For this reason the iconographic tradition arose for painting Chaturmukha in the form of the Brahman servant of Nyen Lotsawa. At the bottom of many Sakya paintings it is a common theme to see Panjarnata Mahakala flanked by the Brahman on the right and Shri Devi (Palden Lhamo) on the left - the three main protectors of the Sakya School.

In later times the Gelug School of Tsongkapa adopted the Guhyasamaja practices and the Chaturmukha Mahakala. Many more paintings and depictions of the four faced deity were made and less emphasis was placed on secrecy. The vast majority of Tibetan and Mongolian paintings of Chaturmukha are Gelug in commission. 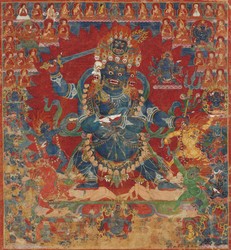 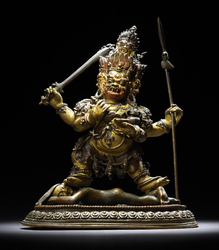 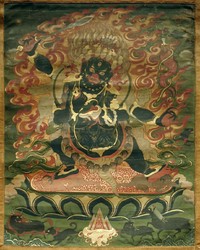 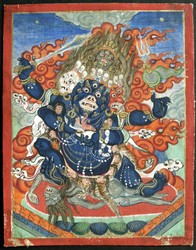 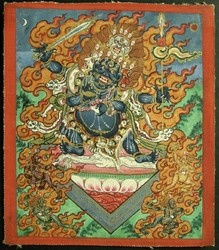 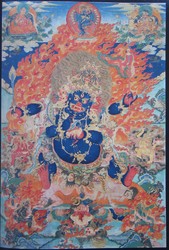 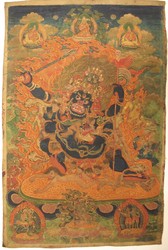 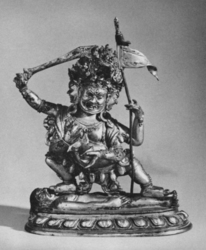 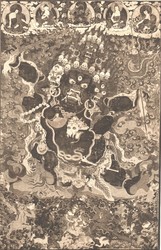 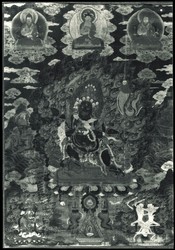 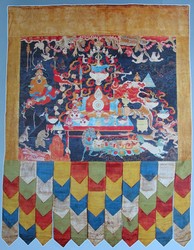 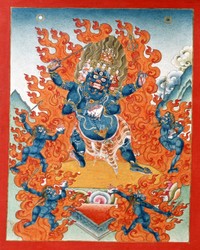