After coming of age as a monk, Ghantapa left the great monastic academy Nalanda in Northern India to live the life of an ascetic yogin, wandering from place to place putting his wisdom into constant selfless practice. His fame grew as word of his great learning and spiritual power spread across the land.

When Ghantapa was in the city of Pataliputra he began meditating under a tree. The people of the city marveled at him and the great king Devapala who ruled the entire land wished to be his patron. Yet when asked by the king to come teach in his palace, Ghantapa declined the offer, shaming the king and stating that his kingdom was full of vice. The king continued to plead but Ghantapa remained firm, saying he would never give teachings to a king who ruled such a sinful kingdom. The king eventually became very bitter and began plotting to destroy the yogin. He decided to offer a large reward to anyone who could disprove Ghantapas virtue.

There was a wicked whore in Pataliputra who told Devapala that she would be able to corrupt Ghantapa and ruin him. This vile woman had a virtuous and unspoiled virgin daughter who was commanded to seduce the yogin. As Ghantapa would meditate the young girl would bow and circumambulate him, begging for the opportunity to serve him and be his patron. He resisted but the girl was persistent. Ghantapa eventually moved to a small hut for the monsoon season and although the maiden followed him; he requested that his food only be brought by male servants.

For two weeks, only men tended to the yogin but on the fifteenth day the young woman told them to stay back and she went herself. When Ghantapa asked her to leave she complained that there were rain clouds in the sky and that she should wait until they pass. Once the clouds had passed it was getting dark and she cried saying that if she were to leave at night bandits would kill her. He told her that she had to sleep outside but as it got colder during the night she moved into the hut. Saying she was cold, she got closer and closer until eventually their bodies touched and thus the two came together in tantric union.

Ghantapa and the young woman became yogin and yogini and in one years time a child was born. Believing they had successfully corrupted Ghantapa, king Devapala and the whore set out to expose him. Aware they were approaching, Ghantapa consulted his consort and she told him that she was scared and wanted to flee. He quickly hid their child in his robe and grabbed a container of liquor and then left, but as they were on the road the king caught up to them on his mighty elephant. The angry Devapala screamed at them, proclaiming that although Ghantapa once called him a sinful man it was he who was evil, for now he had a wife and child. The yogin replied that he had done nothing wrong and was faultless and warned Devapala not to insult him. The furious king repeated the accusation more viciously and without warning, Ghantapa flung his child and jar of liquor to the ground. When he did this, the earth goddess became frightened and let forth a flood that burst upward from a great crack in the ground. Floating in the rising water, the child and the jug magically transformed into a vajra and bell. Ghantapa and his consort then turned into the deities Chakrasamvara and Vajravarahi in union and rose into the sky. The frightened king and his entourage were being overtaken by the flood, the whole time praying to be saved. Ghantapa remained in the Samadhi of immutable wrath. Just as the men were about to drown, Avalokiteshvara appeared and with his foot stopped the flood of water by sealing the crack. The kingdom was saved. Bowing down and begging for forgiveness, the men were given instructions and teachings on wholesome spiritual practice by Ghantapa. It is believed to this day that at that moment a large stone statue of Avalokiteshvara instantly appeared in Pataliputra and water still springs up
from under the foot.

The king and his people pledged to change their sinful ways. The entire royal court over time shed their prejudice and bias and found faith. Ghantapa continued to illuminate the path for multitudes of students.

It is said that in six previous incarnations the young girl had caused Ghantapa to break his vows, but in this lifetime, because he had a more developed mind-stream and had completely conquered his dualistic mental constructs, he was able to maintain the true path. Their child was named Vajrapani, meaning 'Vajra in hand'. 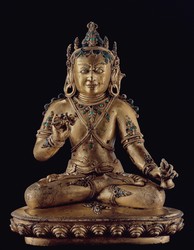 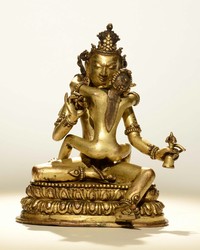