The 1st Karmapa, Dusum Khyenpa Chokyi Dragpa, 1110-1193, (kar+ma pa 01 dus gsum mkhyen pa chos kyi grags pa) was born in Tresho (tre shod), Kham. His father was a Bhairava practitioner named Gompa Dorje Gon (sgom pa rdo rje mgon) and his mother was Latogza Gangcam Mingdren (lha thog gza' sgang lcam ming 'dren), and was given the name Gephel (dge 'phel). His father gave him instructions in the Nyingma tantric traditions, including Ekajati, and he is said to have met Vairochanavajra (bhai ro tsa na badzra, snang mdzad rdo rje), an Indian alchemist who had previously been to the Chinese court where he drank a cup of mercury before the Emperor.

It is said that when Dusum Khyenpa was sixteen he was given a black hat woven from the hair of ten thousand dakini (the physical hat the Karmapas don for their famous "black hat ceremony" was given to the 5th Karmapa by the Ming Yongle Emperor, r. 1402-1424).

He then proceeded to Dagpo Gompa (dwags po dgon pa) and received teachings and transmissions from Gampopa. He soon donned the cotton garb of Milarepa's disciples, training in the heat yogas for nine months. Having shown great accomplishment, Gampopa sent him to Zangri (zangs ri) to continue his meditation, where he sat for four months at a cave named Til and another month and a half at Pagmodru (phag mo gru), before returning to to study with Gampopa for another three years.

Dusum Khyenpa spent the next several years in various places in southern and central Tibet and Bhutan meditating in caves and returning to report his progress to Gampopa. Among the sites were Gyu Palri (brgyud dpal ri) and Shau Tago (sha 'ug stag sgo/ sa 'ug stag mgo), near Sakya. At one point he met a disciple of Naropa residing at a monastery called Shunye Bardzong (gzhu snye bar rdzong) who gave him additional Mahamudra instructions. While in southern Tibet, in 1154, Dusum Khyenpa founded a monastery called Lhalung (lha lung) in Lhodrag (lho brag), which later became the seat of Pawo Tsugla Trengwa (dpa' bo gtsug lag 'phreng ba, 1504-1564/1566).

When Dusum Khyenpa was about fifty years old Gampopa passed away, and, following some last advice that he should return to meditate at Kampo Nenang (kam po gnas nang), he returned to Kham. There he founded the monastery of Kampo Nenang, in 1164. Later, in 1184, he founded the first seat of the Karma Kagyu tradition, Karma Densa (kar+ma ldan sa), also known as Karma Gon (kar+ma dgon), which remained an occasional residence of Karmapas through to the 20th century.

After twenty years in Kham Dusum Khyenpa returned to Tibet, bringing with him a considerable amount of wealth to distribute to the monasteries there. He stated that Gomtsul had charged him with founding monasteries in Tibet, to offer a Prajnamaramita written in gold to Dagla Gampo monastery, and to keep an eye on the violent and disruptive behavior of Lama Shang, Shang Yudragpa Tsondru Dragpa (bla ma zhang, zhang g.yu brag pa brtson 'grus grags pa, 1123-1193). In 1189 Dusum Khyenpa founded Tsurpu Monastery (mtshur phu) in Tolung (stod lung), to the west of Lhasa, which became the principle seat of the Karmapa incarnations.

Dusum Khyenpa famously made predictions about his future incarnations. He is said to have given a letter to his main disciple, Sanggye Rechen Peldrag (sangs rgyas ras chen dpal grags, 1148-1218), foretelling where his next incarnation would be born and instructing him to locate the boy and train him. 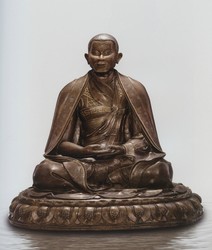 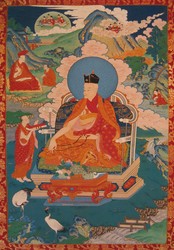 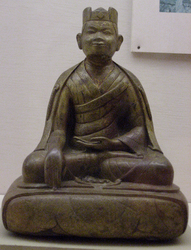