This first painting of the Blue Beryl depicts the setting of the transmission of the Four Tantras in this kalpa, as realized by terton Drapa Ngonshe in the 11th century. Entering a deep meditation in the place known as Sudasana, with an audience of four retinue—gods of the devaloka, hermit sages, Hindu divinities, and Buddhist adherents—Shakyamuni Buddha assumes the form of Bhaisajyaguru, Master of Remedies, from eons past. From this form, the Buddha projects a rainbow of light in all ten directions. When the light is reabsorbed, Bhaisajyaguru projects Vidyajnana from his buddha-mind/heart-center, who is essentially the embodiment of Akshobyavajra. In the form of a hermit sage, Vidyajnana urges all four retinues to study the science of medicine. Bhaisajyaguru then projects Rsi Manasija, who is essentially the nature of Amitabha, the primordial wisdom of discernment, and personification of speech. In the form of another hermit sage, Rsi Manasija circumambulates the Buddha three times, and requests The Four Tantras [since no member of the four retinue have the courage to do so].

The whole of the Four Tantras are then a conversation between Vidyajnana (a personification of the Buddha’s mind) and Rsi Manasija (a personification of the Buddha’s speech). The First Tantra known as the “Root Tantra” is revealed by emanating, from his heart, Akshobya—mirror like primordial wisdom. The next painting, also part of the “Root Tantra”, depicts the structure of the Tantra in the manner of a metaphor used for the whole Tibetan Buddhist science of medicine—a tree with three roots, nine stems, forty-seven branches, 224 leaves, two flowers, and three fruits, which all correspond to different topics within the science of medicine.

The Second Tantra, known as “Exegetical Tantra” is revealed by emanating, from the crown of his head, Vairocana—primordial wisdom of absolute nature of reality. The “Exegetical Tantra” demonstrates the natural tools of the physician and reflect the nature/tools of the physician that surround Sudasana (depicted in the first painting) as well as outlining the possible qualities of a practicing physician—establishing a direct connection between generosity, ethics, patience, perseverance, concentration, wisdom, and the aptitude to succeed as a menpa.

The Third Tantra, known as the “Instructional Tantra”, is revealed by emanating, from his navel, Ratnasambhava—primordial wisdom of equality. The “Instructional Tantra” details the treatment of many diseases and is divided into fifteen sections. These paintings depict the information on bloodletting, surgical and moxibustion points, etc. Another illustration depicts the consecration and purification of medicinal herbs through visualization for the practice of Tibetan Medicine. The final illustration of the “Instructional Tantra” depicts the moment in which Ratnasambhava is reabsorbed into the navel center of Bhaisajyaguru.

The fourth Tantra, known as “Final Tantra”, is revealed by emanating, from his genital region, Amoghasiddhi—primordial wisdom of accomplishment. A number of these paintings demonstrate connections drawn by Tibetan physicians between pulse and disease or particular forms of demonic possession. This group of paintings also conveys, “absolute diseases of the lifespan and dependent diseases of past karma- which are respectively considered to be treatable and untreatable by medical science.” Finally, the last Blue Beryl painting depicts the entrustment of the Four Tantras of medical science and the unbroken lineage of transmission 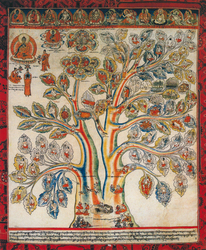 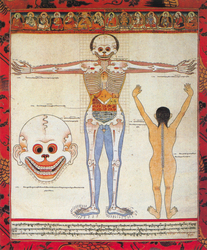 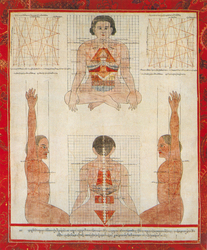