The central Lokeshvara is also not always portrayed the same. What is consistent in most compositions is the one face and two hands, legs together, along with the red body colour. The right hand is often in a gesture of generosity and the left held to the side supports a large white flower blossom over the left shoulder. However, the positions of the arms and hands can vary between compositions. One painted example, HAR #89001, strays very far from the norm and depicts a thousand faced Shristhikantha with a thousand arms following the model of other Universal Deities. The posture and general appearance of the two armed Shristhikantha Lokeshvara is also very reminiscent of Arya (Pagpa) Lokeshvara.

The paintings often depict several more gods emanating from Lokeshvara than the nine described in the literature. One example has seventeen, others have fifteen, fourteen, thirteen and eleven. The gods are are not always consistent from one painting to the next. For example, Sarasvati in one composition appears with one face and two arms holding a vina stringed instrument and in another painting she has four arms and seated on a white goose. Placement is also not consistent with some paintings locating the god Shiva at the top above the head of Lokeshvara while other artists place Shiva to one side or the other.

With many of the compositions other figures are added outside of the inner circle of the emanated Hindu gods. Most often these are standard Buddhist deities such as Buddhas depicted at the top of the composition and wealth deities and protectors located at the bottom. The cleanest and simplest composition is HAR #24074 where there is the Lokeshvara surrounded by fifteen gods seen against a landscape background with four very small gods in the clouds and four equally small donor figures in the foreground.

Karandavyuha Sutra:
"From the eyes are the sun [Surya] and moon [Chandra], from the forehead Maheshvara [Shiva], from the shoulder Brahma, from the heart the Great Powerful One [Vishnu], from the two teeth the Goddess Sarasvati, from the mouth all of the wind is born [Vayu], from the feet earth [Bhudevi], and from the belly arises the Water God [Varuna]." bka' 'gyur (stog pho brang bris ma). 'phags pa za ma tog bkod pa shes bya ba theg pa chen po'i mdo. Volume 74, Chapter 4, pages 501-502. 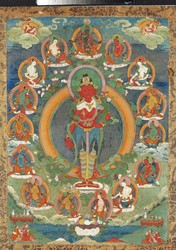 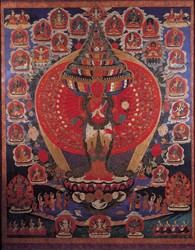 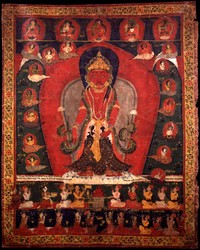