The Jataka stories, like the Avadana stories, are depicted either as a continuous narrative or a narrative vignette incorporating the key visual elements to represent the essence of each story. Because of this. of the four compositional types, there are no over-lapping figure or repeated figure compositions for this Jataka subject. Also, there are no special ground colours such as black, gold or red. Jataka paintings employ either a register or floating figure composition and a multi-coloured palette for the depictions of the figures and surroundings.

A single scroll work painted composition containing all thirty-four stories will always have a central Shakyamuni Buddha subject. A set of paintings depicting the thirty-four stories divided by an uneven number of compositions will have either a central buddha figure for each composition or only for the first painting in the set. Depending on the choice of the donor or the artist the following paintings in a set might have no central figure and use that additional space in the composition for detailed or extended narrative vignettes. 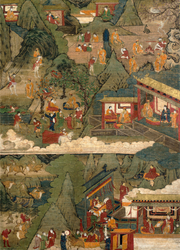 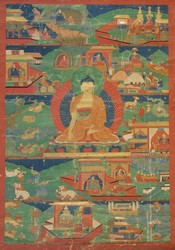 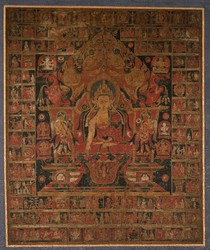