Key Elements: The key elements for distinguishing a Namcho Sukhavati painting and a standard Mahayana depiction of Sukhavati are: [1] standing Lokeshvara with four arms, the sets of [2] Buddhas, ten, six and five, the [3] figure of Padmasambhava meeting a haggard old lady, the [4] rows of Indian and Tibetan teachers, and the addition of two or more [5] meditational deities. Any combination of several of these characteristics will likely lead to an identification of a Namcho Sukhavati composition.

Most compositions depict the standing Lokeshvara with four arms and the remaining seven of the Eight Great bodhisattvas with the typical two arms.

The Indian and Tibetan teachers appearing at the middle right and left sides not fixed and can be different on different paintings likely depending on the donor and artist. There are several compositions that three teachers on the right and three on the left. Nagarjuna is often depicted on the left side along with either Dromton or Marpa, accompanied by a monastic figure. The three on the right side wear a Gampopa hat, a black Karmapa hat and a red cap. Some compositions have no teachers while some others might have four or more teachers on each side of the central figure.

A number of the paintings also include meditational deities such as Hayagriva, Vajrayogini, Jinasagara and Vajrapani. But these figures are not consistent between compositions. It is possible that a number of the paintings are copies of one or several originals along with an artist's personal variations in iconography, local style, or trained painting tradition. The painting styles are generally in an Eastern Tibetan Kham-ri style with several in a Palpung and at least one in a Trehor Namkha Gyan painting style.

(The images below are only a selection of examples from the Sukhavati Namcho Page). 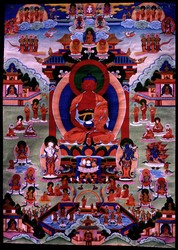 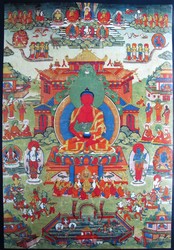 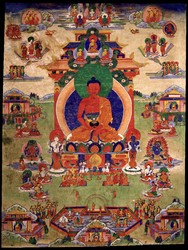