The precise and technical appearance of Buddhist Tantric deities is based on Indian textual descriptions which are found in the tantra literature. These texts typically mention the gender, mood, colour number of faces and arms, hand attributes, along with a posture. The descriptions can be further elaborated on in an explanatory tantra or a commentary written by historical Indian teachers. Later commentaries written by Himalayan and Tibetan authors might provide even further detail or document oral instructions passed down through a tradition of lineage teachers.

Regional artistic traditions further influence the appearance of a deity with regard to the overall shape of the body and regionally available colour pallet along with interpreted style for depicting the hand attributes and design of the body ornaments. The style of specific deities changes over time with the development of changing painting styles and preferences of individual artists. Influential artists with large painting ateliers gradually transform into painting traditions for a period of time until once again adopting to new aesthetics influenced by up and coming artists.

There are always some, but not many, exceptions to the orthodox description of a deity. A well known example is the figure of Hevajra with eight faces and sixteen hands. According to early textual descriptions he has four legs with the two right placed with one standing and one raised and with the left legs, again, one standing and one raised. According to the oral instructions of the mahasiddha Virupa the two right legs are standing and the two left legs are raised in a dancing posture.

Sakya Tradition descriptions of the deity Vajrabhairava have the faces turned slightly to the side. Gelug Tradition presents the faces directed forward. These small variations in appearance are based on religious school preference and not on textual sources.

Arapachana Manjushri is textually described as white in colour however when the practice migrated and reached Tibet in the 11th century the colour was changed generally to orange and less well known in the white form as described in the Siddhaikavira Tantra.

Orthodoxy for deity figures is primarily based on the basic textual description. Variations in design and style are influenced by region, time period, and painting tradition. Figures are accepted as more or less correct based on both religious tradition and the painting tradition of the time. 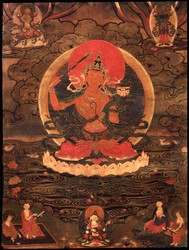 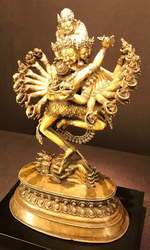 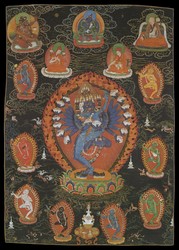