Terton Migyur Dorje (gter ston mi 'gyur rdo rje) was born in his uncle’s home, near the Nabun Fortress in Ngom (ngom) in the Nangchen region of Kham in late 1645. His father was named Gonpo Tseten (mgon po tshe brtan), and was said to have descended from the Tibetan Imperial royal family. His mother, whose name is not known, was the daughter of Adrub Gyel (a grub rgyal). His paternal grandfather was named Anu Tsering Bum (a nu tshe ring 'bum). Tradition maintains several miracles related to his conception and birth.

His family fell onto hard times when he was young; they lost their wealth and were accused of wrongdoings. Nevertheless, an encounter with the great Karma Kagyu lama Karma Chakme (ka+rma chags med 1610/1613-1678) in 1655, when he was eleven, resulted in his being identified as the reincarnation of the Katok (kaH thog) lama Trulzhik Chenpo Wangdrak Gyatso ('khrul zhig chen po dbang drag rgya mtsho, d. c.1640), himself said to be the reincarnation of Lochen Vairocana and Shupu Pelgyi Sengge (shud phu dpal gyi seng ge, d.u.). According to tradition, Mingyur Dorje had previously appeared to Karma Chakme in a dream. The lama performed three types of purification rituals and then examined the boy, finding numerous auspicious marks, including the letter tha on the sole of his right foot. Nevertheless the identification was not embraced by the monks of Katok, who refused to recognize him, despite the fact that, according to legend, the boy recalled extensive details from Wangdrak Gyatso's life.

Karma Chakme took charge of the boy, giving him the empowerment on Tsedrub Sangdu (tshe grub gsang 'dus). When the boy threw the flower it landed across the middle and eastern sections, indicating the middle deity Vairocana -- Mingyur in Tibetan -- and the eastern deity, Vajrasattva, or Dorje Sempa; thus he gained his name, Mingyur Dorje. Karma Chakme gave him additional Nyingma teachings and then sent him back to his father's house.

On the tenth day of the eleventh month of the same year Mingyur Dorje was back with Karma Chakme. Karma Chakme later explained to Dundul Dorje that since there were no Nyingma lamas in the area nor anyone to take care of Mingyur Dorje because Wangdrak Gyatso was unfamiliar there. He claimed that had he not taken him in the boy would not have lived to the age of eleven.

They made elaborate feast offerings with the young boy on a throne wearing a lotus-hat, a vajra and other ritual objects ready for his use. He is said to have given teachings and also bestowed vows in a playful child-like manner but with perfect fidelity to the rite.

The boy was gradually was given many empowerments and oral transmissions of many important scriptures, including Ratna Lingpa’s three cycles of supreme empowerment and the Khandro Nyingtik (mkha' 'gro snying thig). He also learned calligraphy, art, sculpture, torma making, thread-cross weaving for rituals, and many performances, rites, and rituals. He underwent several retreats with his teacher.

He was said to have experienced vision of many deities including Padmasambhava, Amitāyus and Tārā; dharma protectors including Damchen Garwa Nakpo (dam chen gar ba nag po); and past saints such as Milarepa (mi la ras pa, 1040-1123). He is said to have had the ability to bring rain and curing illnesses, and earned the name Terton Sherab Mebar (gter ston shes rab me 'bar) meaning Treasure Revealer with Blazing Wisdom.

The biographies of Mingyur Dorje are somewhat explicit in their description of his erratic behavior around his treasure revelations -- most of which are classified as "mind treasure" (dgongs gter), meaning that he received them through visions rather than as physical objects. Leading up to the revelation of his most important cycle, the Namcho (gnam chos), he is said to have run and jumped about, thrown objects off of shrines, fainted and stiffened -- episodes that he would not remember upon coming out of his trance. He also suffered from skin diseases, arthritis, dyspepsia, paralysis, phlegm and other conditions that occasionally brought tears of pain.

As is described in the biographies, the revelation of the Namcho began in a dream state, in which he received a long-life empowerment and empowerment of the six types of clairvoyance from the buddha Samantabhadra that dispelled all obstructions. Later, in a meditative experience, he received most extensive empowerment on Mahākaruṇā from Avalokiteśvara followed by sādhānas, empowerments, and oral transmissions of about forty deities from Amitābha that were recorded later. Then Padmasambhava in person gave him the four types of empowerments, sādhānas, teachings, and esoteric instructions with some Sanskrit words. He later received Dzogchen teachings from Avalokiteśvara through the stages of meditation for two months.

All of this was dictated to Karma Chakme, who wrote it down, and upon whom Mingyur Dorje gave the initial empowerments and transmissions. Following the revelation he entered into a three year retreat.

Coming out of his retreat with a reputation, despite still being a very young man, not yet fifteen years old, Mingyur Dorje next went to his uncle's estate in the Chamdo region, which had previously been confiscated by the authorities. The local leaders were less than enthusiastic about his arrival, and threatened him, his uncle, and a half-brother with imprisonment. The conflict with the authorities appears to have been settled, as Mingyur Dorje spent some time opening -- that is, consecrating -- several sacred sites in the region.

Mingyur Dorje continued to reveal treasure. He traveled with a secretary who would write down whatever he would say. Among these mind treasures were rites for effecting weather. He once encountered a community that was facing the problem with excessive rain; Mingyur Dorje revealed a treasure and instructed the monks to perform it, and immediately the rain stopped. He revealed treasure cycles relating to Amitāyus and Avalokiteśvara, and gave the empowerments and transmission to Karma Chakme.

At the age of about fifteen in 1659, Rinchen Namgyel (rin chen rnam rgyal), a powerful king inKham whose influence extended into China and Mongolia, requested blessings and empowerments and made considerable offerings.

The same year he cured a Chod practitioner of insanity and also subdued some harmful spirits at the Sangdzong (gsang rdzong). Subsequently he bestowed empowerments to a large crowd.

Around that time Karma Chakme met the Katok lama Rigdzin Dudul Dorje (rig 'dzin bdud 'dul rdo rje, 1615-1672) who said, “Mingyur Dorje and I have never separated from Padmasambhava's presence; today, by any means I should meet him.” He as gifts sent a horse, a gold image, a vajra and bell, and a long-life prayer. When the two met Dudul Dorje received him with great honor and made further offerings and appointed him as custodian of his own treasure teachings. In return Mingyur Dorje granted him about twenty different empowerments of the Namcho treasure and also some other teachings. They celebrated and marked the occasion by performing religious dance in supplication to the dharma protectors.

Rigdzin Dudul Dorje and other lamas urged Mingyur Dorje to practice his and others' treasures, apparently in the wake of predictions that he would face severe obstacles in his seventeenth and eighteenth year. Beginning in 1661 he thus entered retreat for three years, practicing mainly teachings connected to Padmasambhava.

Karma Chakme, who was then about fifty years old, asked Dudul Dorje to take over caring for Mingyur Dorje, wanting to go into retreat himself. Dudul Dorje demurred, and recommended that he continue to serve the young man. However, he promised to spread the Namcho teachings in Powo and U-Tsang. In 1663, when Mingyur Dorje reached the age of nineteen, Karma Chakme gave him advice relating to his daily practice and then told him that as he had reached adulthood he would be independent from then on. The two thus parted ways.

Subsequently he also visited many other places including Ling (gling), Tongshong (tong shong), and Bumnguk ('bum ngug) influencing their kings and royal families, and public. He gave extensive Dzogchen teachings that were attended by monks from Katok, Muksang (rmugs sangs), and other monasteries.

In 1663 Mingyur Dorje also opened additional sacred places in the fifth month of the year, including Dewapuk Cave (bde ba phug brag phug) and Regla Kardzong (reg la dkar rdzong), and revealed images of Avalokiteśvara, Amitāyus,Cakrasaṃvara, Padmasambhava and so forth. He then spent a few months on pilgrimage to Tsari (rtsa ri), Jopo Mountain (jo pho ri), Nyandong (nyan dong) and so forth, and composed an introduction to them. While there he revealed images of the Buddha, Vajrasattva, Cakrasaṃvara, Vajrapāṇi, Padmasambhava, and Jambhala.

He was said to have used all offerings received to sponsor religious activities, making offerings to lamas and monks, distributing goods to the poor people and constructing icons of the Namcho deities.

While at Pukhur Monastery, at the end of 1666, Mingyur Dorje felt ill. Performing rituals designed to heal himself, he sent Karma Chakme a statue of black Jambhala and a letter in which he wrote that the statue was very important and must be preserved. He wrote that he was far from home and suffering from sickness, and that he was without any protection and needed his blessing and compassion. Karma Chakme immediately composed a long-life prayer and did healing rituals, and sent monks to bring the young man home.

On the twenty-seventh night of the third month of the fire-sheep year of the eleventh sexagenary cycle, in 1667, Karma Chakme received the news of Mingyur Dorje's death. He had passed away in the evening of the sixteenth day of the third month. He had taken two cups of nectar, sat upright in meditation posture with his left hand turning his rosary beads. In silence he nodded three times when a disciple requested him for his compassion, and then passed into nirvana. He was only twenty-three years old. Karma Chakme immediately commenced necessary prayers and rituals and made arrangements for the funeral. Rumors arose that Mingyur Dorje had been poisoned, but the accusation did not gain credibility.

Mingyur Dorje's body remained untouched for three days, after which it was washed with purified water and dressed in silk and ornaments, a scholar's hat placed on his head. The cremation was done according to tradition. It is said that in the ashes his heart and tongue were found intact, and these and other relics were distributed among the lamas and monks who had come from monasteries such as Katok, Garje (sga rje), Pelyul (dpal yul), Drigung ('bri gung), Riwoche (ro bo che) and Chamdo (chab mdo). His possessions were also distributed among the monasteries.

The matter of Mingyur Dorje's reincarnation was somewhat contested. Some believed that he would reborn after two years, as indicated by his drinking two cups of nectar before passing away, and Katok Sanggye Tashi (kaH thog sangs rgyas bkra shis, d.u.) asserted that the reincarnation would come within two years. Karma Chakme asserted that he would be reborn within three years but that early recognition could lead to obstacles. Many predictions were made that identified Terton Mingyur Dorje as the last rebirth of Shubu Pelzang and Vairocana. Ultimately, Namcho Rigdzin Namkha Chowang (gnam chos rig 'dzin nam mkha' chos dbang, d. 1784) was identified as the reincarnation of Mingyur Dorje. He settled at Katok and was known as the First Moktsa Tulku (rmog rtsa 01).

Terton Mingyur Dorje's composition, not including his treasure revelations, include a famous prayer called “Hundred Thousand Names of the Buddhas,” and other texts on fire-puja rituals, grammar, poetry, spiritual poems, and so forth, and were collected in three small volumes.

Samten Chhosphel earned his PhD from CIHTS in India where he served as the head of Publication Dept. for 26 years. He has a Master’s degree in Writing and Publishing from Emerson College, Boston. Currently he is an adjunct Assistant Professor at the City University of New York, and Language Associate in Columbia University, NY.

[Extracted from the Treasury of Lives, Tibetan lineages website. Edited and formatted for inclusion on the Himalayan Art Resources website. Published August 2011. 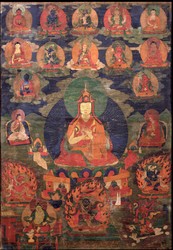 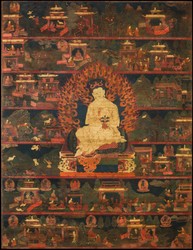