The Three Meanings of the Term

Videos:
- What are Mahasiddhas: Question 1
- What is 'Mahasiddha' in Buddhist Art: Question 2

[1] Accomplishment, someone that has accomplished the fourth level of spiritual attainment in the Buddhist Tantric system of paths and levels, specifically relating to the Four Empowerments and the level of attainment called mahamudra (Skt.), the great symbol or seal.

[2] Inclusion, any person that is included in one of the several sets of eighty-four mahasiddha as defined in the early Tibetan literature attributed to the authors Vajrasana, Abhayadatta Shri, Palde and others.

[3] Appearance means a siddha described in literature and depicted in art with the Tantric regalia of a wrathful deity - in Heruka Appearance; bone ornaments, tiger skin skirt, holding a skullcup, in the company of a consort, etc. (Please note that not all mahasiddha have this Tantric Heruka Appearance). A primary Tantric source for the description of Mahasiddha appearance is the Hevajra Tantra, part 1, chapter 6 - Application of the Vow. Other descriptions are found in the various Chakrasamvara Tantras. 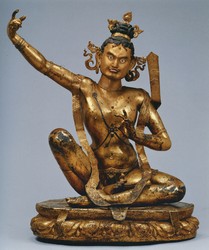 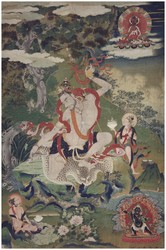 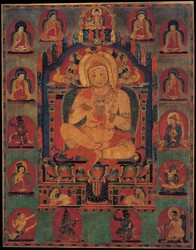