There are two different systems for depicting the nine faces of Vajrabhairava. The first system is called [1] Stacked Faces (zhal tseg) and the second is called [2] Circular Faces (zhal kor). The first, Stacked Faces is considered the older system and can be found depicted primarily in the paintings and sculpture of the Sakya, Marpa Kagyu, Jonang and Shangpa Kagyu Traditions. The second system of Circular Faces is depicted in the Gelug Tradition.

There are occasions where Circular Faced depictions can be found in the Bodong and Ngor Traditions of Sakya. However these instances are rare, late, and isolated to minor or secondary figurative depictions in a larger painting with a central figure and dozens of secondary figures.

Vajrabhairava with nine Stacked Faces is defined by the central face of the deity having a buffalo head with a single wrathful face placed to the right and left sides. Stacked above that are three more wrathful faces. Again above that are three faces. The top level has two wrathful faces at the sides and the middle top face is that of Manjushri, orange in colour, slightly peaceful and slightly wrathful. This orientation or configuration of three levels of three faces is called Stacked Faces. The faces on the right side are from the bottom up, blue, red adn yellow. The central faces are a blue buffalo, red, and yellow. the faces of the left side are white, smoke-coloured, and black.

Vajrabhairava with nine Circular Faces is defined by the central face being that of a buffalo with three additional faces placed to the immediate right side and three more faces placed to the immediate left side. Above the central buffalo face are two more faces one above the other. The orange face of Manjushri is identified as the uppermost face. This orientation is called Circular Faces. The faces on the horizontal right side are yellow, blue and red. the vertical faces in the middle are a buffalo face, red and yellow. The horizontal faces on the left side are smoke-coloured, white, and black. The Mahavajrabhairava text reads that the colours on the right side are 'blue, red and yellow.' The faces on the left are 'white, smoke[-coloured] and red.'

In the 15th and 16th centuries there were a number of dialectic exchanges between teachers of the Sakya and Gelug traditions claiming the orthodoxy of one system of facial configuration over the other. Early examples of paintings and sculpture from both India and Nepal use the Stacked Face system. Early Tibetan paintings after the 14th century can be identified that also depict both forms of Vajrabhairava with examples of minor figures that also depict the deity with the circular faces. Both appear to be early Tibetan iconographic forms. The earliest known image of circular faces is from the Yuan dynasty and depicts a mandala closely resembling the lineage transmission of Zhang Chogdru Sherab Lama. This textile work is dated by inscription to circa 1330.

It was Tsongkapa in the 14th century that popularized the deity Vajrabhairava with Circular Faces as one of the three principal (Anuttarayoga) meditational practices in the Gelug Tradition of Tibetan Buddhism. As a general rule in the study of Buddhist Tantric iconography - any depiction of Vajrabhairava with the faces in a circular orientation identifies it as most likely belonging to a Gelug iconographic program. Depictions of Vajrabhairava with a stacked face orientation belong to a Sakya, Dagpo Kagyu or Jonang iconographic program. There are a few examples of 19th century Ngor paintings from East Tibet that present the circular faces configuration similar to the Gelug, however the colour scheme follows the reading of the Mahavajrabhairava Tantra. 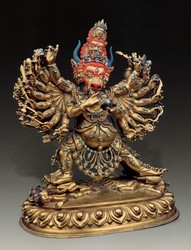 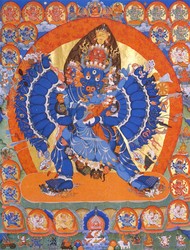 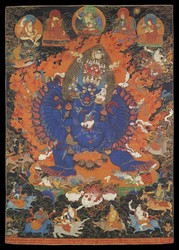