The figure is generally peaceful in appearance with three human faces topped with a horse head. He has four arms and holds an attribute in three hands with the first right hand extended in a gesture of generosity. The different examples are not consistent with regard to the hand attributes. Some of the attributes are damaged and not easily identifiable. The figures wear jewel ornaments and heavenly attire and sit in the vajra posture atop a lotus or lion throne base.

At this time there are no Pala, Nepalese or Tibetan examples of this iconographic form of what is possibly Lokeshvara or Hayagriva or the two deities represented together in a single figure. There are currently no identified Sanskrit or Tibetan texts describing this figure. 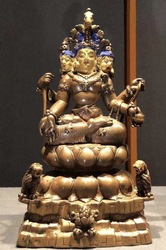 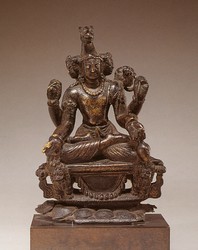