Hvashang, meaning a 'Chinese monk,' is considered an historic figure who was sent by Taizong, the Tang Emperor of China, to invite the Buddha Shakyamuni to come and visit China. Since the Buddha had already passed away the invitation was relayed to the Sixteen Great Arhats. From approximately the 16th century onwards most paintings of the Buddha Shakyamuni and the Sixteen Arhats depicted in Himalayan Style Art have included the patron Hvashang. In paintings earlier than the 16th century Hvashang is conspicuously absent.

Curiously in Himalayan and Tibetan art Hvashang is always depicted as a layman wearing jewelry and fancy silk robes. Although he is referred to in some historical accounts as a monk he is more commonly described as the patron, or the patriarch to the Sixteen Arhats, because he presented the invitation and was the representative of the Emperor of China. However neither of the two early Tibetan liturgies of the ritual practice of Shakyamuni Buddha and the Sixteen Arhats, made popular by both the Lord Atisha and the Kashmiri Pandit Shakyashribhadra, include the patron Hvashang.

In Chinese Buddhism depictions of a figure similar to Hvashang are believed to be the Buddha Maitreya and are commonly found as an individual painting, mural or sculpture. 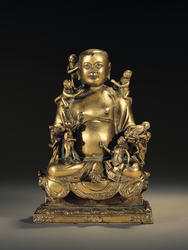 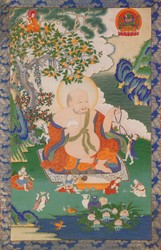 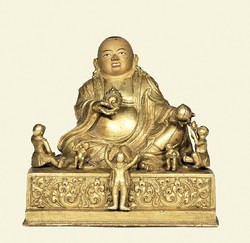