The earliest textual references for a red Sarasvati are described in the Krishna Yamari Tantra and literature where she is listed as a retinue deity in the mandala of Yamari. As a stand alone meditational deity, Red Sarasvati is found in the various compendiums of meditation practices (sadhana) such as the Bari Gyatsa, Patsab Gyatsa and Drub Thab Gyato. In these collections they describe a wrathful, red in colour, deity with three faces and six arms. Following those texts and descriptions is the Shakyashri Bhadra transmission of a one faced, two armed, form of the deity to Sakya Pandita Kunga Gyaltsen. Following that is the one faced, four armed, in union with Manjushri, form of the deity recorded by Bodong Panchen Chogle Namgyal.

Several of the forms of Sarasvati listed above are found as secondary figures in the example of HAR #35113. The top left red form of Sarasvati, with an inscription stating that it originates from the Manjushri Dharma Cycle Text, has one face and two hands. She holds upraised a curved knife in the right hand and a skullcup to the heart with the left, seated in a relaxed posture.

Again from the same painting, HAR #35113, the Orange Sarasvati situated on the right side is similar in appearance to Arapachana Manjushri with a sword held aloft in the right hand and a dharma text held to the heart with the left hand. She is seated in a relaxed posture. The two forms of the red, three faced, and six armed Red Sarasvati that appear on the middle left and lower rights sides appear to be differentiated by the hand attributes only. These three faced forms of Sarasvati follow closely with those described in the early Sanskrit sadhana compendium texts and in those texts are said to derive from the Krishna Yamari Tantra.

So far, on the HAR site, there are no examples of the Bodong Panchen Chogle Namgyal form of red Sarasvati.

Sakya Pandita Tradition
"...the goddess Sarasvati, with a body coral in hue, like the colour red. (With) one face and two arms. The right hand holds a wish-fulfilling jewel and the left a mirror of wisdom. The right leg is extended and the left drawn in. (With) large swelling breasts and adorned with a crown of jewels, a short necklace, bracelets, anklets and a long necklace and the like, wearing a flowing lower garment and various silks; youthful, sixteen years of age, serious, peaceful and smiling, with a charming manner. Immeasurable rays of light shine forth. Perceiving the lack of inherent self-existence, the inside of the body is like a clear reflection." (Sakya Pandita Kunga Gyaltsen, 1182-1251).

"...the goddess Sarasvati with a body coral in colour, like a mass of heaped particles blazing with a radiance wreathed by a thousand rising suns. Very beautiful, peaceful, and smiling, a charming youth of sixteen years. The right hand extended in salutation holds a wishing jewel and the left a bright clear mirror of pristine awareness. The two feet at play, the right extended and left drawn up, on a lotus and moon; adorned with beautiful silks and jewel ornaments; the union of luminosity-emptiness like the reflection of the moon in water." (Jamyang Khyentse Wangpo, 1820-1892).

Bodong Panchen Tradition:
"...Vajra Devi Vagishvari, Holy Sarasvati, with a body red in colour, one face and four arms. For the four main hands, the first two embrace the father, the remaining two, the left holds a jeweled string-instrument held at the left side and the fingers of the right are gently strumming bringing forth the melodious sound of the ocean and completely delighting all buddhas. Seated with the two feet in lotus posture. In the lap is Bhagavan Lord Manjushri with a body orange in colour, one face and four hands. For the main hands, the first two embrace the mother. For the remaining two, the right holds a sword blazing with immeasurable light and the left holds a very clear blue utpala, above is the Prajnaparamita book. Both forms appear passionate, adorned with various jewel ornaments and silks, fully seated in the middle of pulsating rays of light." (Jamyang Khyentse Wangpo, 1820-1892)

Drub Thab Gyatsa:
[47] Vajra Sarasvati: wrathful and secret Vajra Sarasvati.
Vajra Sarasvati, with three faces and six hands. The main face is red, the right blue and the left white. The three right hands hold, a lotus, sword and curved knife. The three left, a wheel, jewel and skullcup. Having jewel ornaments and garments of silk. Seated in a manner of ease with the left leg extended. (Originating with the Krishna Yamari Tantra). 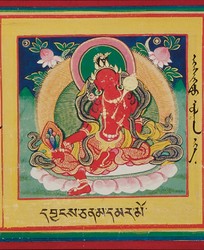 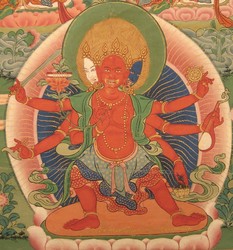 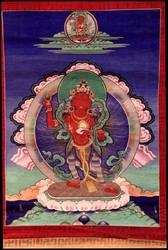