Gifts of the Yongle Emperor:

Three hats were gifted to three different Tibetan teachers during their visit with the Yongle emperor (1360-1424) in Nanjing, China.

Karmapa was the first to receive a hat in 1407/8 followed by Kunga Tashi in 1413 and then Shakya Yeshe after 1414. It is not clearly known how many other hats were given out by the Yongle emperor. It is possible that such information is recorded in the official palace records, or biographies of Yongle.

The upright petals of the hat are shared between that of Kunga Tashi and Shakya Yeshe. The double vajra emblazoned on the front of the cap style hat is shared between the hats of Karmapa and Kunga Tashi. The Shakya Yeshe hat is adorned with the Five Tatagatas. The Karmapa hat has white clouds decorating the sides and trailing towards the front. All three hats have the sun and moon in front or up towards the peak.

Aside from the ceremonial hats, other gifts such as official titles, silver, textiles and artworks were also bestowed by the emperor. It is certainly possible that other religious teachers received the gift of a hat from Yongle as many Tibetan religious groups and traditions were vying for the patronage of the Chinese emperor at that time. 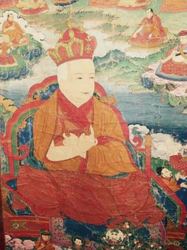 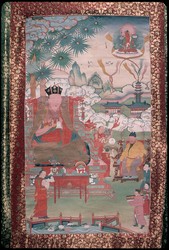 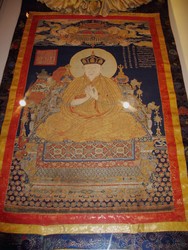