Zhabkar Tsokdruk Rangdrol (zhabs dkar tshogs drug rang grol) was born in 1781 among the yogins of the Rebkong (reb kong) region in Amdo province, who were renowned for their mastery of the Vajrayāna practices. His ancestral line was from the Cho clan. His childhood name was Ngawang Tashi (ngag dbang bkra shis). According to his extensive autobiography, as a child he showed a strong inclination toward the contemplative life, and visions similar to those experienced in advanced Dzogchen practice came to him naturally.

He entered Zhohong (zho 'ong), a community of tantric practitioners, at the age of eleven, and had his first Nyingma teachings at the age of twelve, from Orgyen Trinle Namgyel (o rgyal 'phrin las rnam rgyal, d.u.). His first Dzogchen instructions came from Jampel Dorje ('jam dpal rdo rje, d. 1817), who gave him the Mindroling tradition of Ati Zabdon (a ti zab don).

Despite his deep affection for his mother he resisted her repeated requests that he marry. He went instead to the Geluk monastery of Dobi Monastery (rdo bis) where, in 1801, he received monastic vows from Arik Geshe Jampel Gelek Gyeltsen Pel Zangpo (a rig dge bshes 'jam dpal dge legs rgyal mtshan dpal bzang po, 1726-1803), who gave him the name Jampa Chodar (byams pa chos dar). Jampel Gelek Gyeltsen advised him to seek out the Nyingma master Chogyel Ngakgi Wangpo (chos rgyal ngag gi dbang po, 1736/1740-1807), a minor king of the Kokonor region and descendent of Gushri Khan (1592-1654).

Jampa Chodar found Ngakgi Wangpo at the latter's seat, the formerly Geluk monastery of Urgeh Dratsang (u rge grwa tsgang), and stayed with him there until Ngakgi Wangpo's death in 1807 and received from him a full range of teachings, from Lojong to the teaching that became his central practice, the treasure revelation of Kunzang Dechen Gyelpo (kun bzang bde chen rgyal po, b. 1736) known as The Wish-fulfilling Gem, Hayagriva, and Varahi (rta phag yid bzhin nor bu). It was during the empowerment that Ngakgi Wangpo gave him the name Tsokdruk Rangdrol. Ngakgi Wangpo gave him numerous other empowerments and teachings, including advanced Mahāmudrā Dzogchen instructions such as Jigme Lingpa's Dzogchen Yeshe Lama (rdzogs chen yes shes bla ma) and the Khandro Nyingtik (mkha' 'gro snying thig) of Pema Ledrel Tsel (pad ma las 'brel rtsal, 1291-1315). Ngakgi Wangpo also encouraged him to study the writings of Longchenpa, and had his own teacher, Lama Jinpa (bla ma sbyin pa, d. u.) teach him Vinaya.

Following Ngakgi Wangpo's death, Tsokdruk Rangdrol practiced for five years in the wilderness of Tsezhung Wenpai Gatsel (rtse gzhung dben pa'i dga tshal). He then meditated for three years, from 1806 to 1809, on the small Tsonying (mtsho snying) Island in the middle of Lake Kokonor, the Blue Lake of Amdo. His search for sacred places took him to many other solitary retreats: the glaciers of Amnye Machen; the sacred caves of Drakkar Treldzong (brag dkar sprel rdzong), the "White Rock Monkey Fortress"; the arduous pilgrimage of the ravines of Tsari, Mount Kailash, and the Labchi Snow Range. He spent many years in the caves where Milarepa (mi la ras pa, 1040-1123) and other saints had lived and meditated (he was himself said to be a rebirth of Milarepa, just as his main teacher, Ngakgi Wangpo, was said to be an incarnation of Marpa) such as Takmo Dzong (stag mo rdzong), Gopo Dzong (rgod po rdzong) and others. Despite his monastic vows, he let his hair grow long, and wore the topknot of a tantric practitioner.

Tsokdruk Rangdrol came to be known as Zhabkar Lama, the "White Footprint Lama," after he spent years in meditation at Mount Kailash, in a remote spot not far from Milarepa's Cave of Miracles, near the famous White Footprint (zhabs dkar), one of the four footprints said to have been left by the Buddha when he traveled miraculously to Kailash. It was also said that wherever he would set his feet the land would become "white with virtue," meaning that through his teachings the minds of the people would be turned toward the dharma.

Zhabkar practiced in retreat for many years in the wilderness of mountain hermitages and then wandered as a homeless yogin throughout Tibet, giving teachings in songs to all beings, from bandits to wild animals. His pilgrimages brought him as far as Nepal, where, in the Kathmandu Valley, Nepal, in 1818, he covered the entire spire of the Bodhinath stupa with the gold his devotees had offered him.

In 1828, at the age of forty-seven, Zhabkar returned to Amdo where he continued to serve others until his death in 1851. Among his many students were Orgyen Jigme Chokyi Wangpo (o rgyan 'jigs med chos kyi dbang po, 1808-1887), the fifth abbot of Dzogchen Monastery (rdzogs chen dgon); Drubchen Pema Rangdrol (grub chen pad+ma rang grol, 1786-1838); and the Second Gurong Lama, Natsok Rangdrol (dgu rong 02 sna tshogs rang grol, 1822-1874). The names of many more students are found in his lengthy autobiography.

In addition to his inspiring autobiography, which he began as early as 1806 while staying at Tsonying Island, and completed in 1837, Zhabkar left numerous clear and inspiring writings, among them the famous Flight of the Garuda. As Dilgo Khyentse Rinpoche once said: "His life-story can move one to tears or to laughter; but above all, as one reads it, one's mind cannot resist being turned toward the Dharma."

(Matthieu Ricard is the main coordinator at Karuna-Shechen. A Buddhist monk, he has lived and studied in the Himalayan region for over thirty-five years, and was the full-time attendant of Dilgo Khyentse Rinpoche for thirteen years. [Extracted from the Treasury of Lives, Tibetan lineages website. Edited and formatted for inclusion on the Himalayan Art Resources website. Published September, 2007. ). 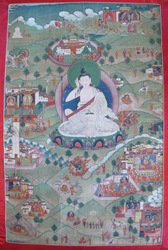 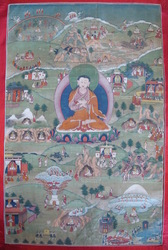 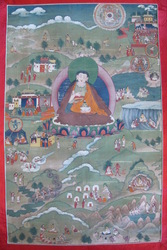 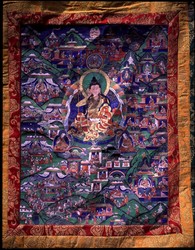